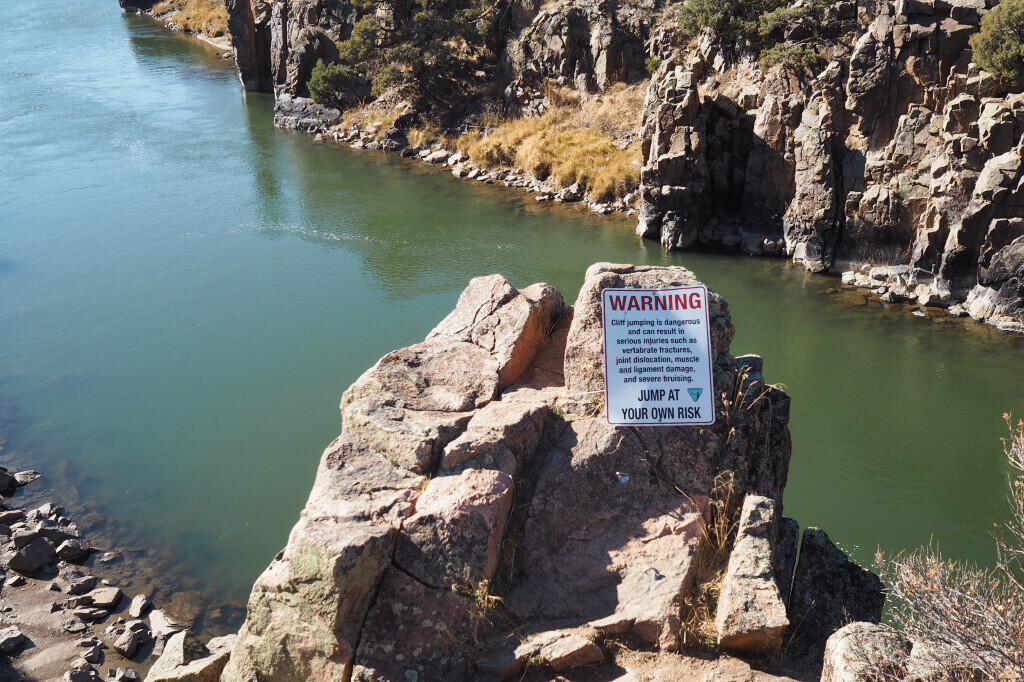 It is located along the river with no man-made structures in sight except for a freight train.

Just as you had the right to know, others have the right to know too, even if you don't want them to. When visiting this important place, please bring your own trash bag and take home twice as much trash as you bring in.

Jump at your own risk

It is only a little over two hours drive from Denver.

Take Interstate 70 west to the Silverthorne exit and head north toward Kremmling.

Turn left on Trough Rd just before the Colorado River, and when you get to Grand County Rd 11, turn a sharp right to reach the Mugrage campground.

The campground is primitive, with little more than pit toilets, but it is free.

It is a 1.4 mile round trip hike to the hot springs from this base.

There are other ways to get there, such as by kayak, but this is the most straightforward. 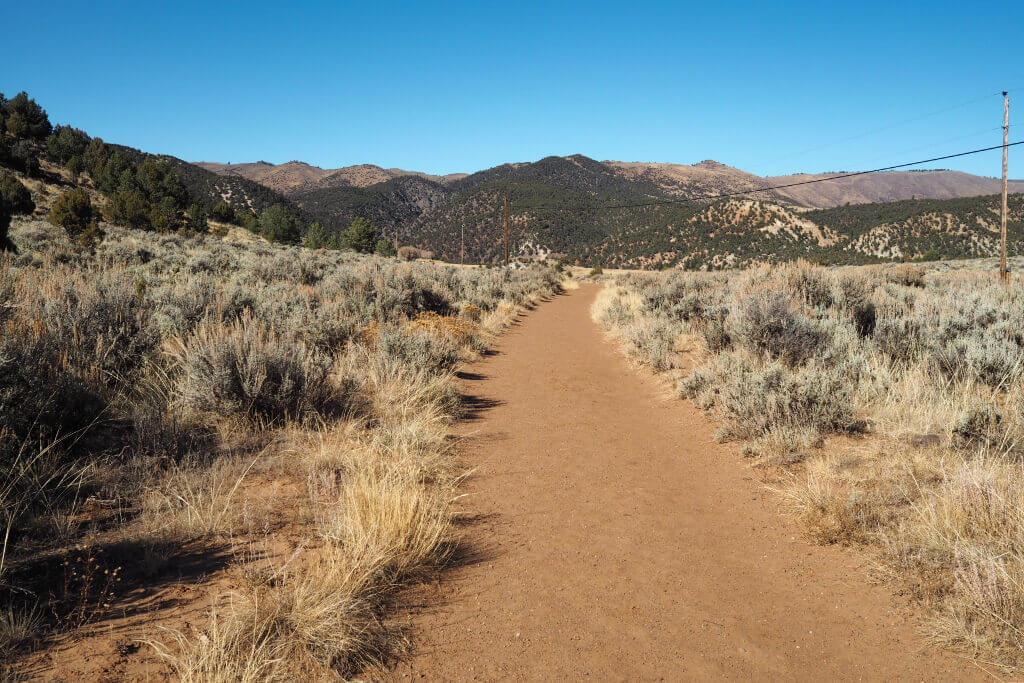 Once up the slippery slope, the rest of the trail was flat and easy except for the end.

The Colorado River gradually came into view on the left. 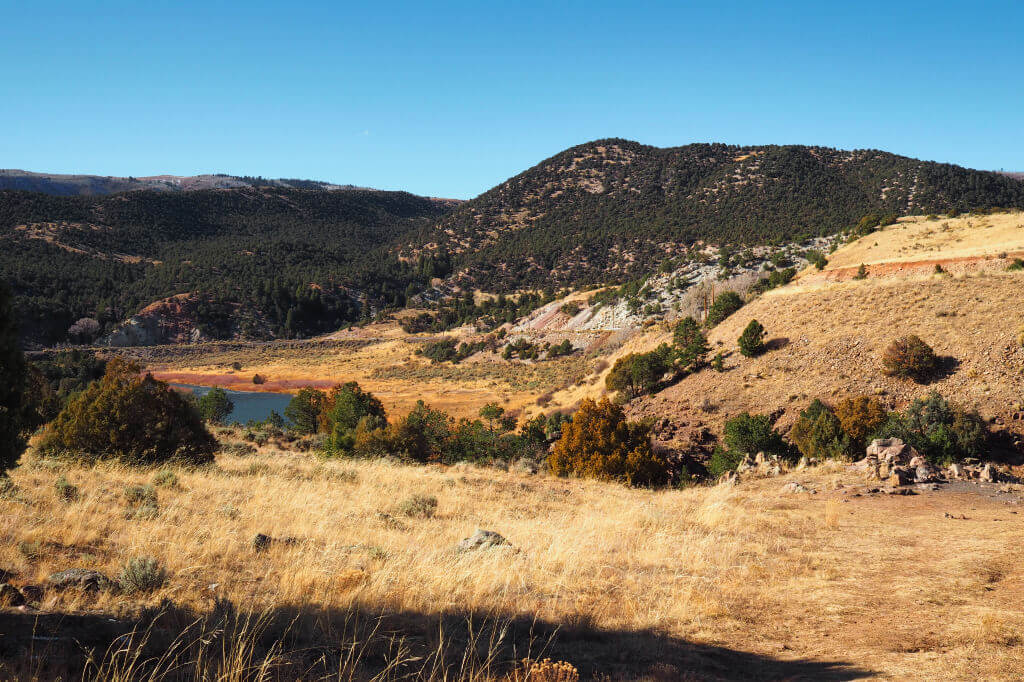 I saw a long train whistling and undulating like a snake.

Because of its low location along the Colorado River, Radium Hot Springs can be completely submerged depending on the time of year and weather conditions. 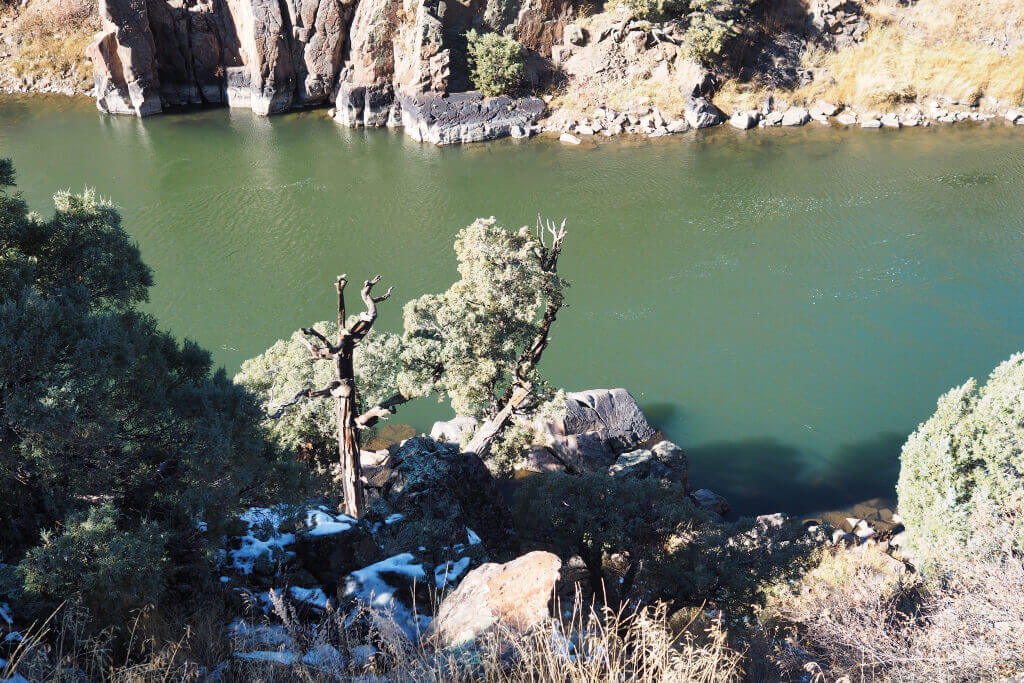 It is probably best to avoid visiting in the spring, when the river is full of water due to melting snow.

As I walked along, keeping an eye on the direction of the river, I spotted a sign attached to a rock that juts out into the river. 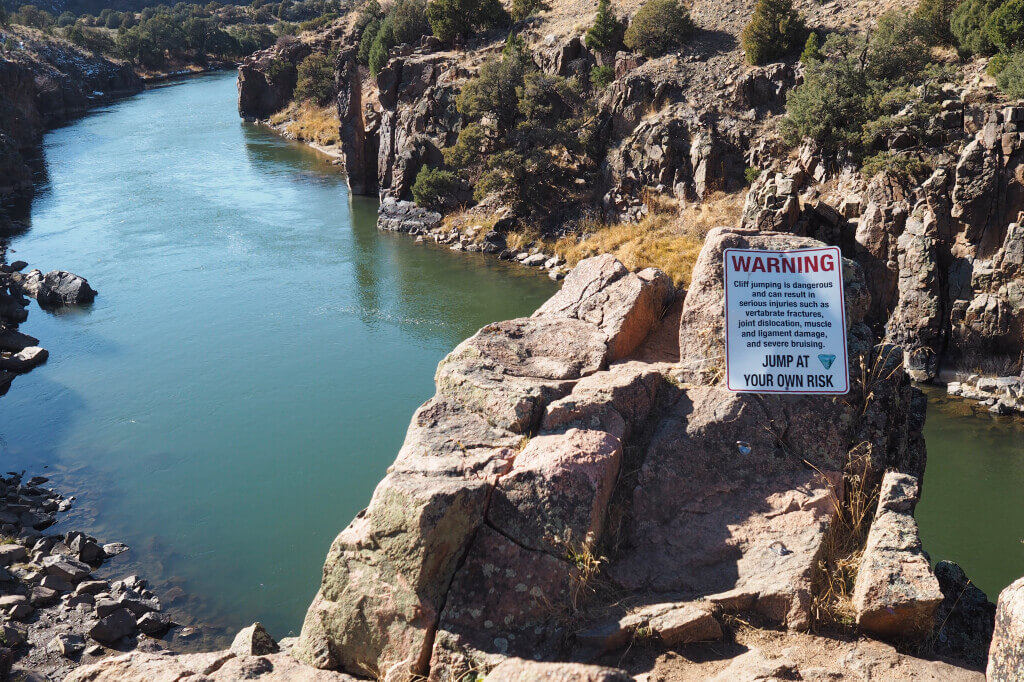 I liked that it wasn't "no jumping in" but "jump at your own risk."

Capybara
If it is banned, people will want to do it.
That makes it more effective.

At the bottom of the valley

This sign marked the path to the hot springs. 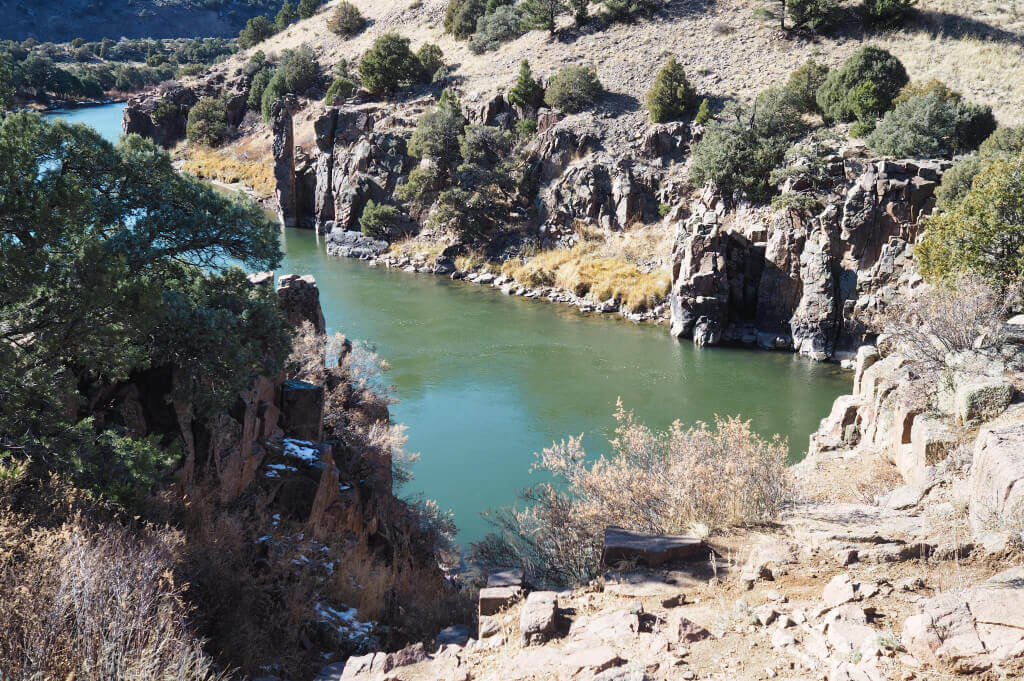 To the left of the rock was a steep ravine, and when I peeked in I could see people soaking.

It is in the path of commercial rafting tours and is usually crowded with people on weekends. 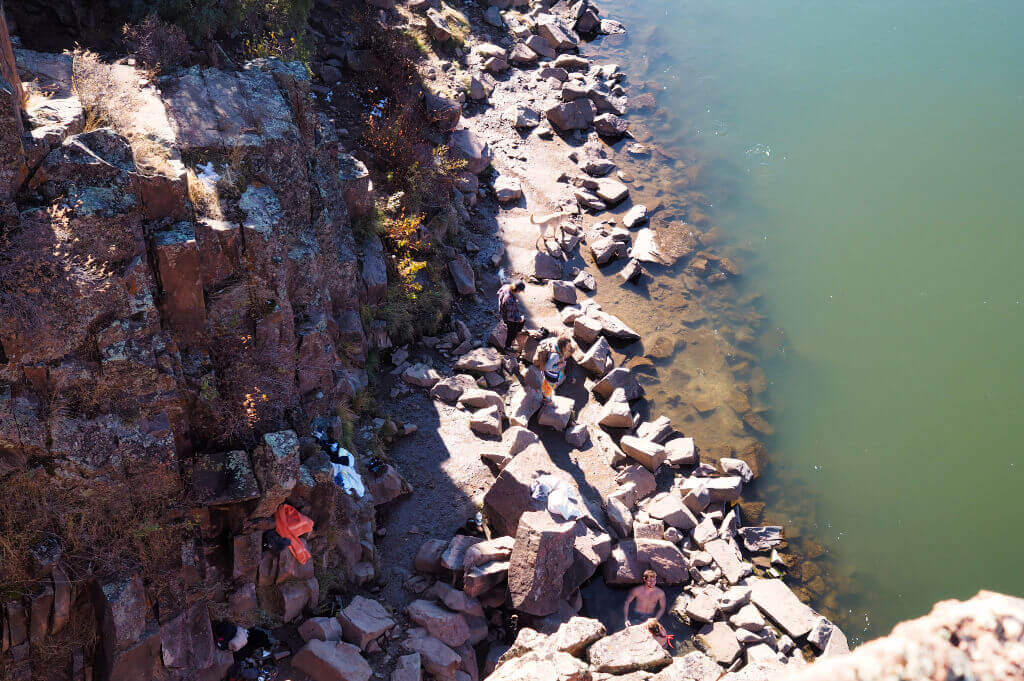 The pool itself was small, about 15 feet in diameter, with a trickle of 97 degrees F water gushing out from between the rocks.

The overall water temp of the pool was about 86 degrees F, making it for the hot season. 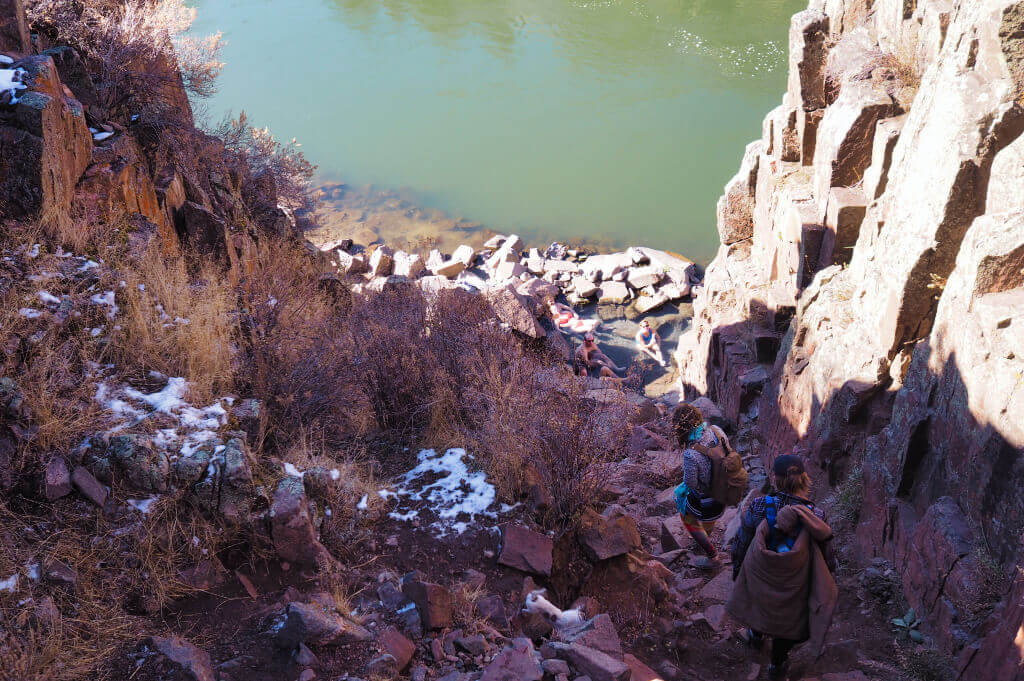 Volunteers discovered the place, which had originally been left to fall into disrepair and reclaimed by the BLM, and in the 1980s; and the rocks were broken up, and the pool took their current appearance.

It might have become a little too famous now because of its location in the suburbs of the city. 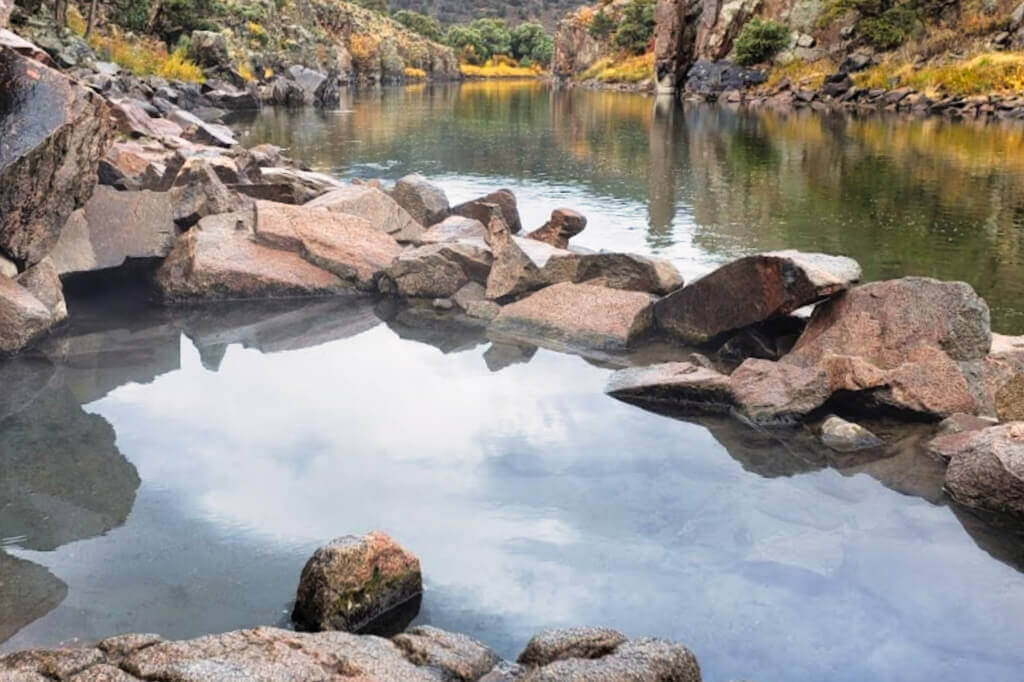 Still, nothing should have changed about the natural view from the pool.

Denver, a huge city with a concentration of high-tech industries, is said to have its beginnings as a mining town during the Gold Rush era. I have soaked in a cave reminiscent of those days.

Ouray, Colorado is often referred to as the "Switzerland of America. It's also the "Jeep Capital of the World," and also home to hot springs.

So you've made it to Pagosa Springs, but don't have the money to stay at a hot springs hotel? Don't worry! There is Hippie Dip Hot Spring where even penniless hippies can soak. 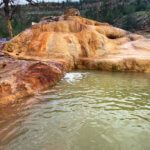 Preconceived notions are tricky things. I have passed by this spring many times and it took me four years to realize that soaking was available.