I have never seen such a strange and beautiful hot spring.

The ruins of an eccentric 1920s hotel that burned down long ago, once known as a nudist's paradise, are no different today.

On the way there, I lost my car.

There are reports that the route I have described is closed for an extended period of time due to wildfire damage. Since the hot spring itself is open, please explore at your own risk the possibilities of reaching by canoe or more challenging routes.

It's not difficult to reach Verde Hot Springs if you know the right way.

The starting point is Camp Verde, not far from Sedona, the famous base for tourism.

The Grand Canyon, Antelope Canyon, or Horseshoe Bend may seem faded and mass-consuming in the face of Verde Hot Springs. 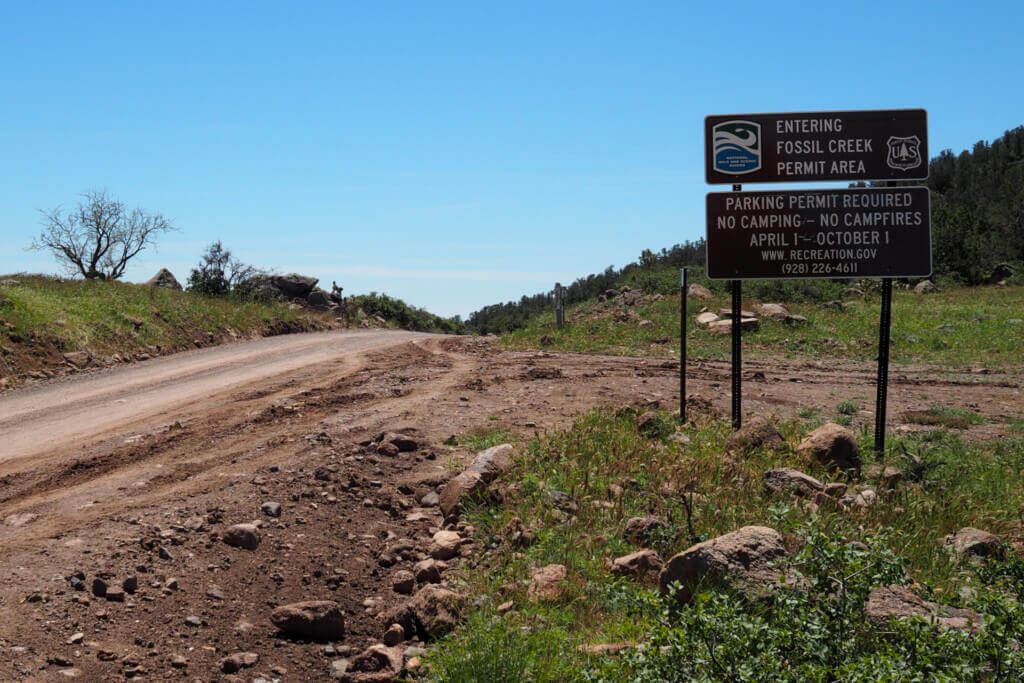 From Camp Verde, head southeast on Highway 260 for about 8 miles and turn right on a dirt road, Fossil Creek Road.

This is where the ranger will stop you, as you will need to purchase a permit in advance to enter Fossil Creek Wild and Scenic River Recreation Area ahead.

Fortunately, Verde Hot Springs itself is just outside of the nature reserve, so you don't need the permit.

Just tell the ranger that you want to go to the hot springs, and he will let you through. 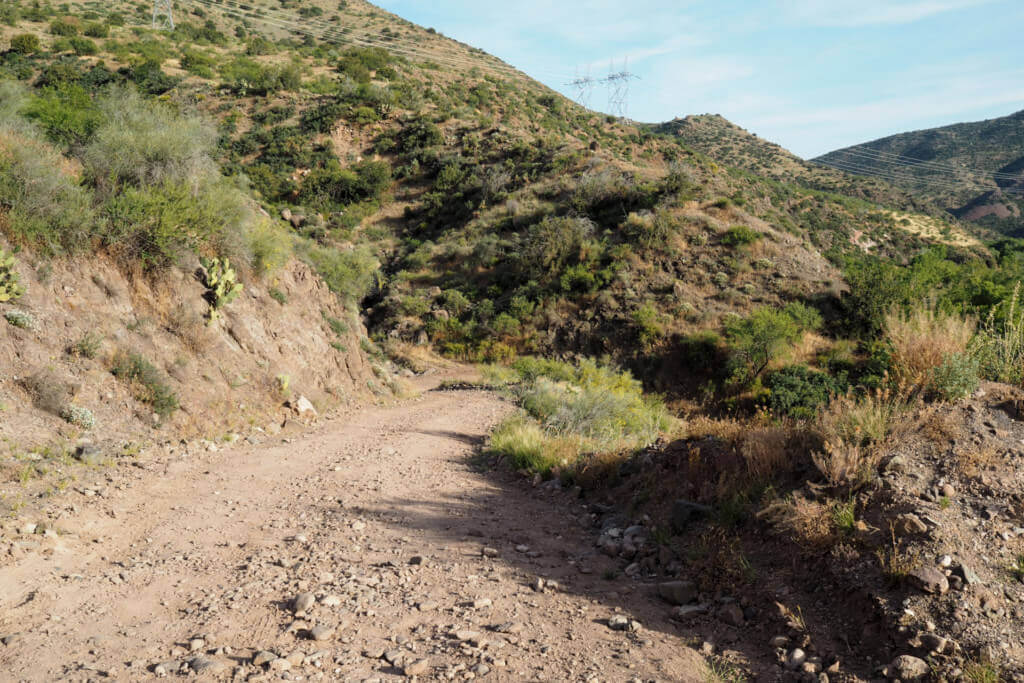 From there it's an 18-mile drive south on dirt roads, so you'll need a car with a high ground clearance, but the route is simple.

On the other hand, if you follow Google Maps from Phoenix, there is a 100% chance of tragedy, just like my total loss of my car.

Alpaca
You're so silly.
Yeah, I know.

As mentioned below, you have to choose a route to the Verde Hot Springs by walking or swimming across the river.

The direct route to the hot springs (Dugas Road) recommended by Google Maps should be unimaginably bad. 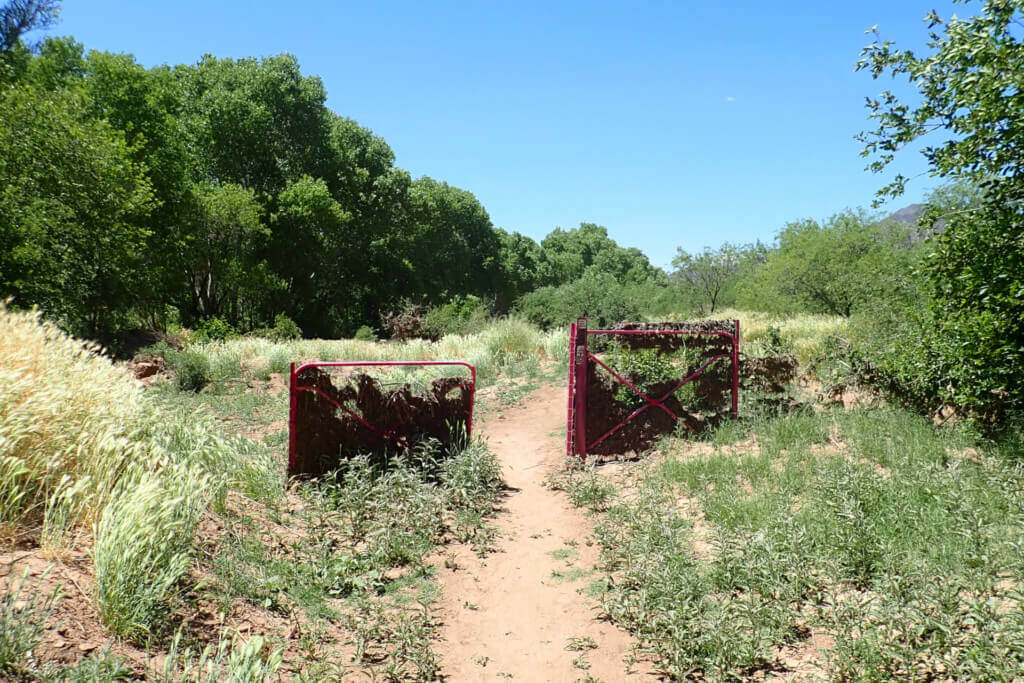 Now, descending down the canyon to the Verde River was Childs Dispersed Camping Area, a free campground.

There were no services other than pit toilets, which were for advanced campers. 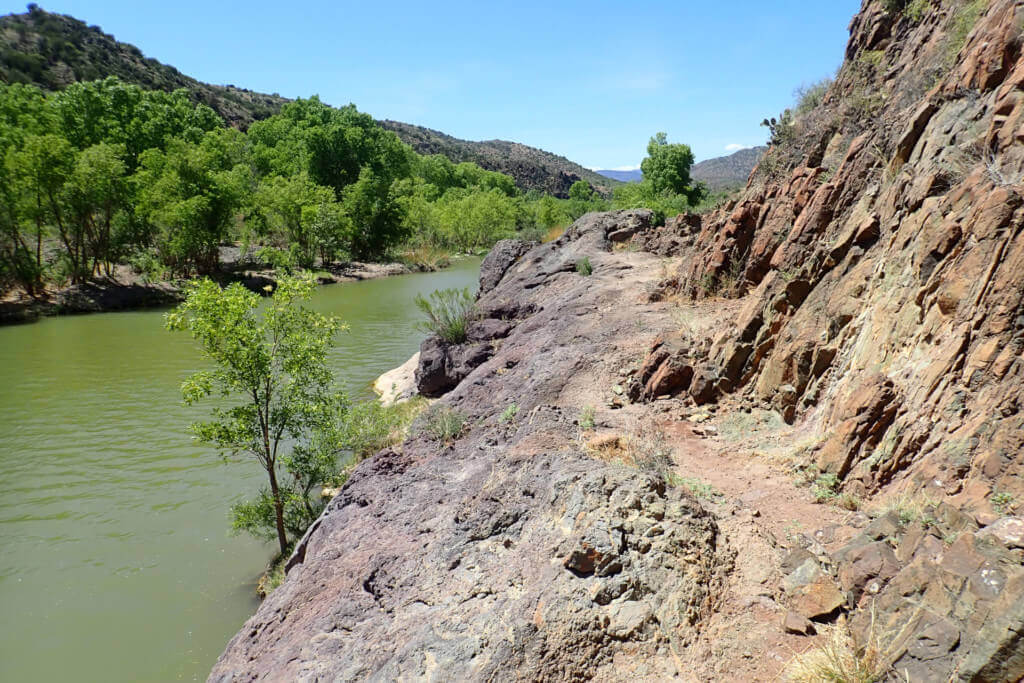 I got out of the car and walked about three miles upstream along the Verde River.

The hot springs were located just on the other side of the river, but the water around the campground was deep and the current was fast, so I took the circuitous route. 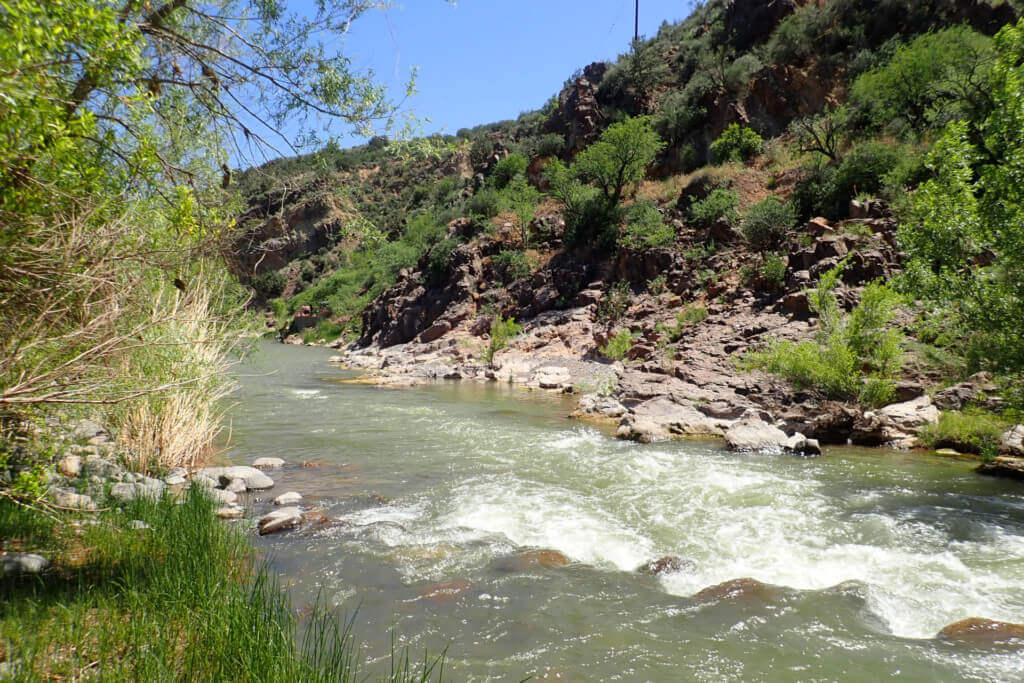 The walkway that was supposed to be on the floodplain had completely disappeared in flash floods.

I reached a point where I could safely cross to the other side of the river. 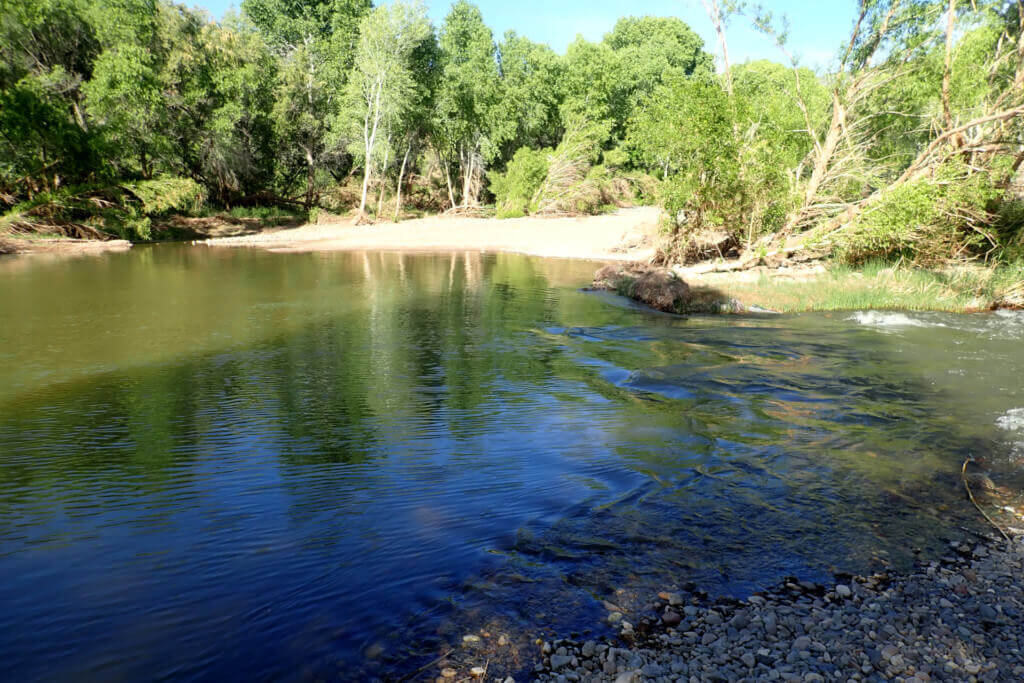 Even in the lowest water levels, it is necessary to be thigh-deep in the river.

If the water rises, the depth of the river can be dangerous, so you need to check the weather a few days in advance and have the courage to turn back if necessary. 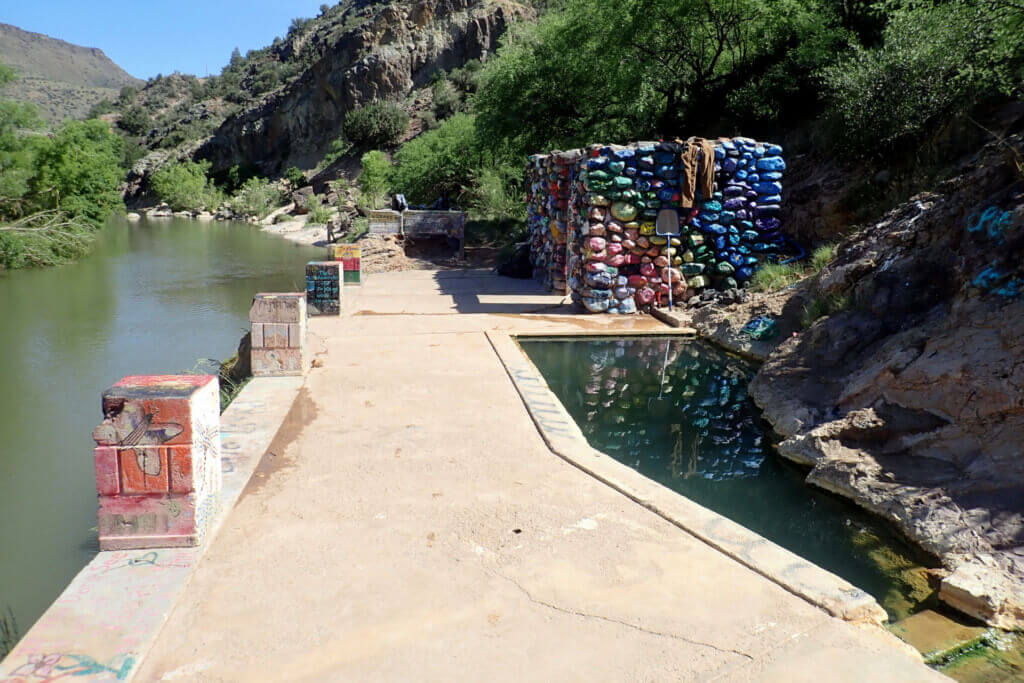 Here are the ruins of a hot spring hotel that was established in the Roaring Twenties and burned down in 1962.

Although the accommodations have been removed, the foundation and the spa area have miraculously survived. 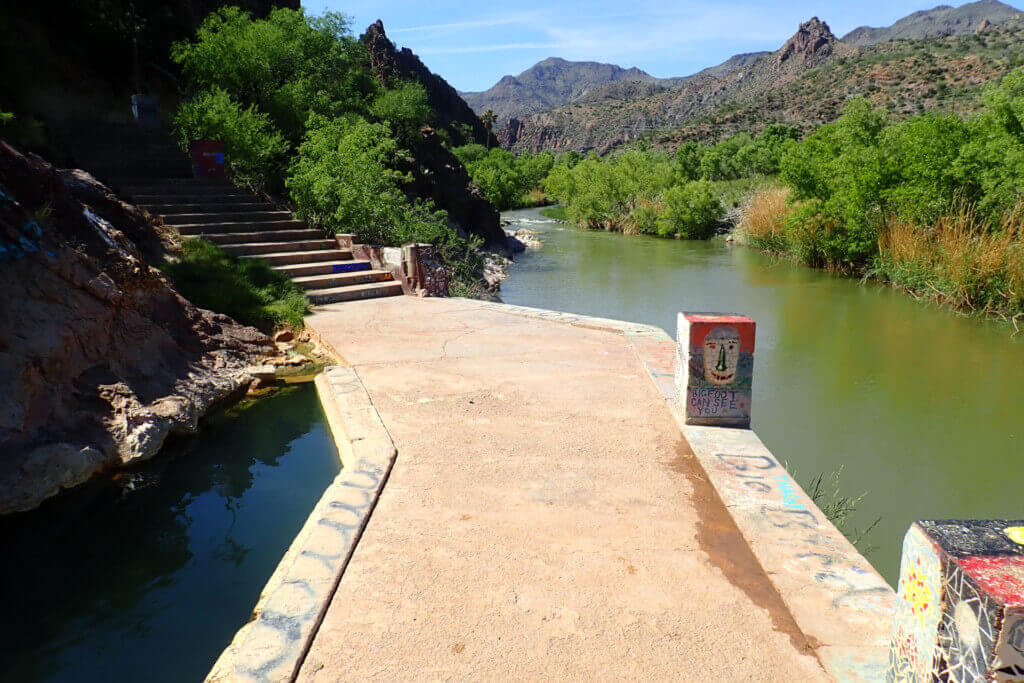 Located on a terrace a few feet high with a wonderful view of the Verde River below.

There was a cave in the rock at the very front, and hot water was flowing out. 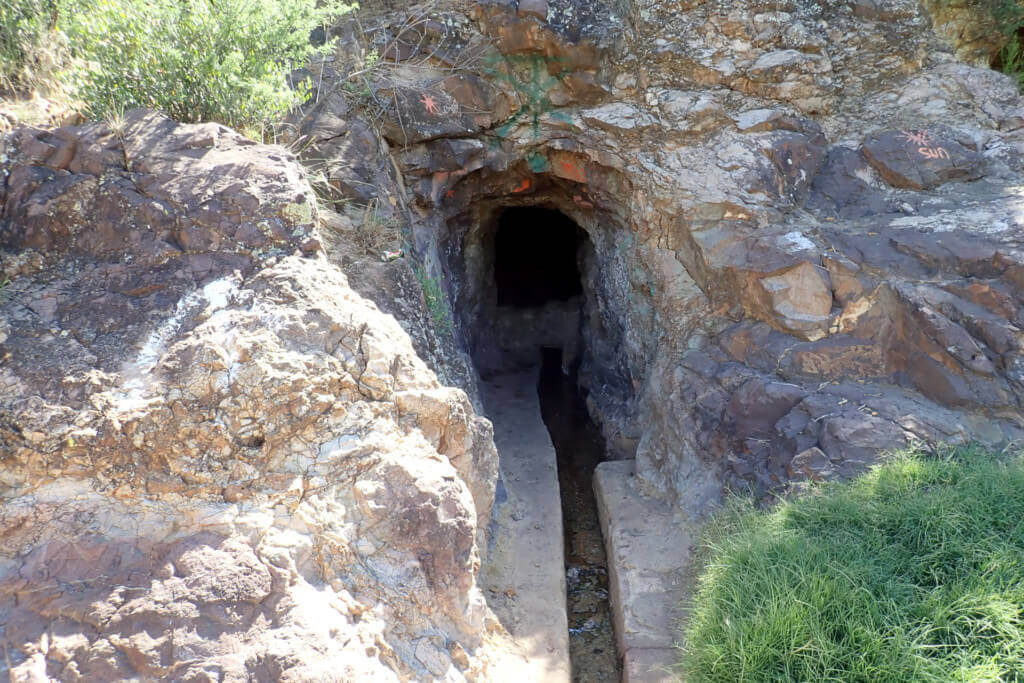 Exploring the interior, I found a hollow where I thought a tub used to be, but it was not possible to soak in it.

At the deepest part, there was probably the source of the springs, but it was so dark, so I gave up investigating. 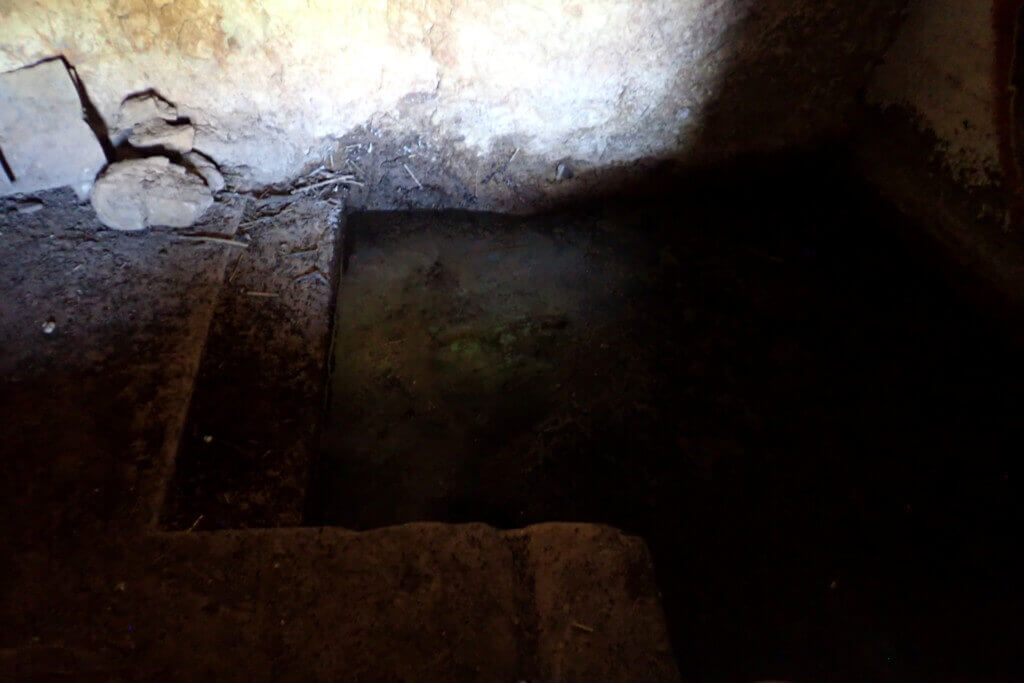 Next to the cave, there was a large outdoor pool.

The water temp was a lukewarm 99 degrees F, tasteless and odorless. 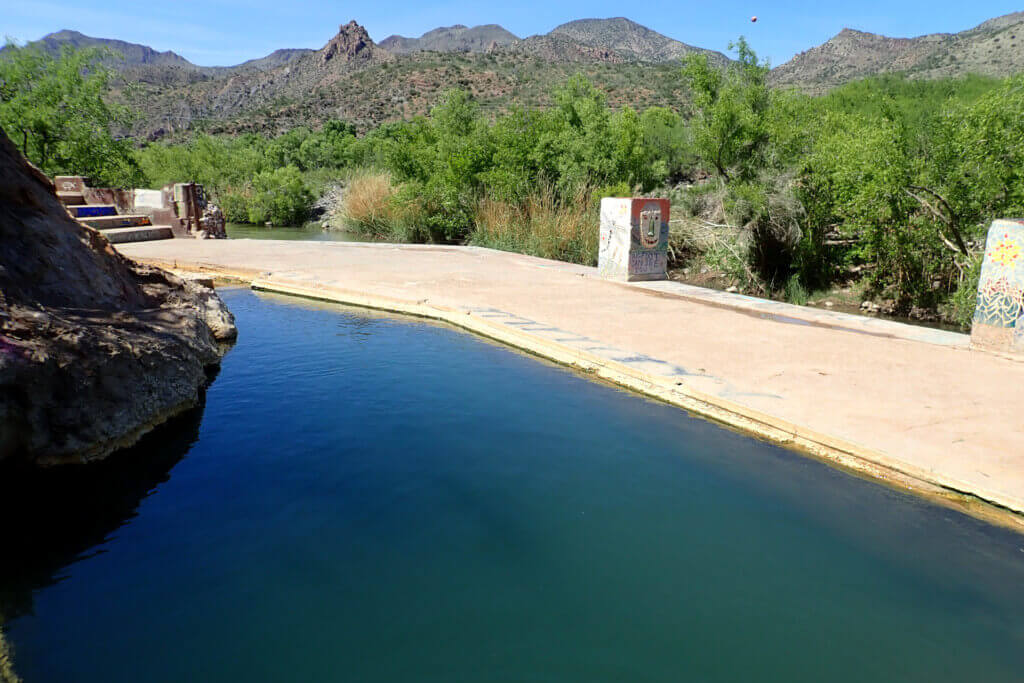 The water seemed to be different from the other two tubs.

Surprisingly, the depth of the water was more than 6 feet, and even adults could not reach the bottom. 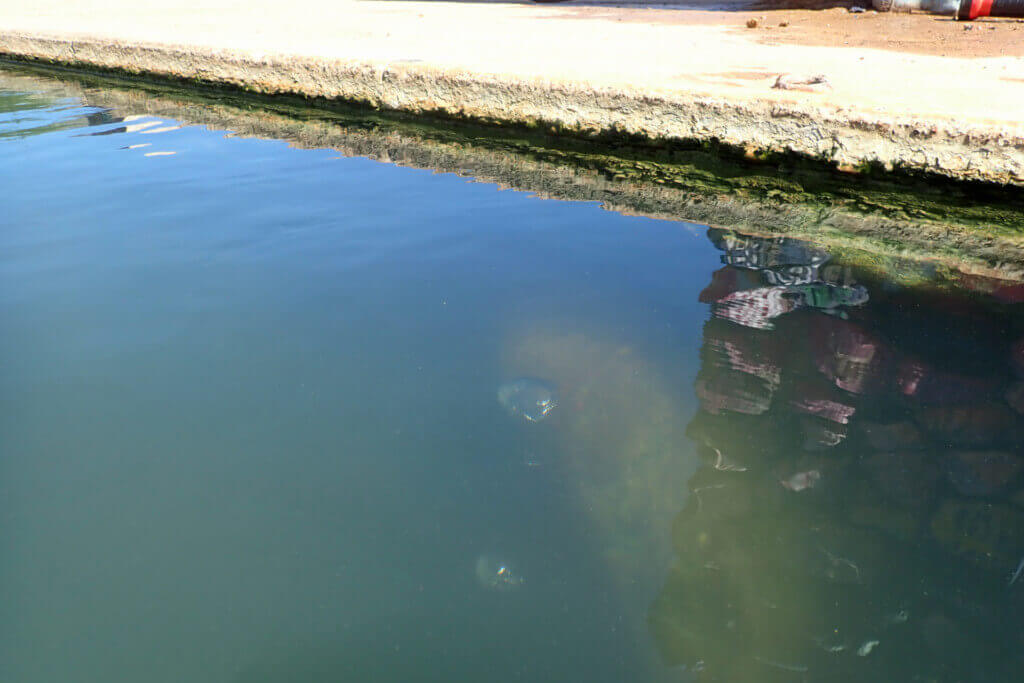 The bottom of the pool was made of natural bedrock, with large bubbles rising from the crevices, signifying free-flowing. 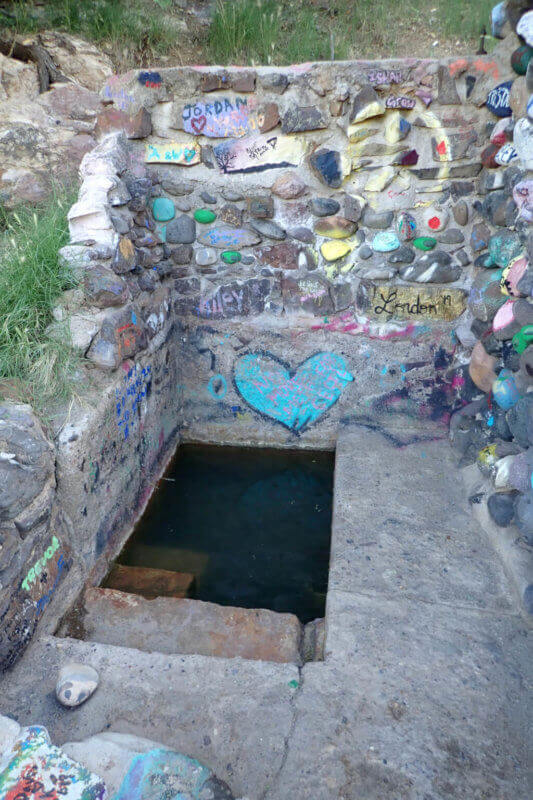 At the back of the colorful bathhouse was the smallest tub, the size of a single person.

Finally, I entered the space decorated with graffiti. 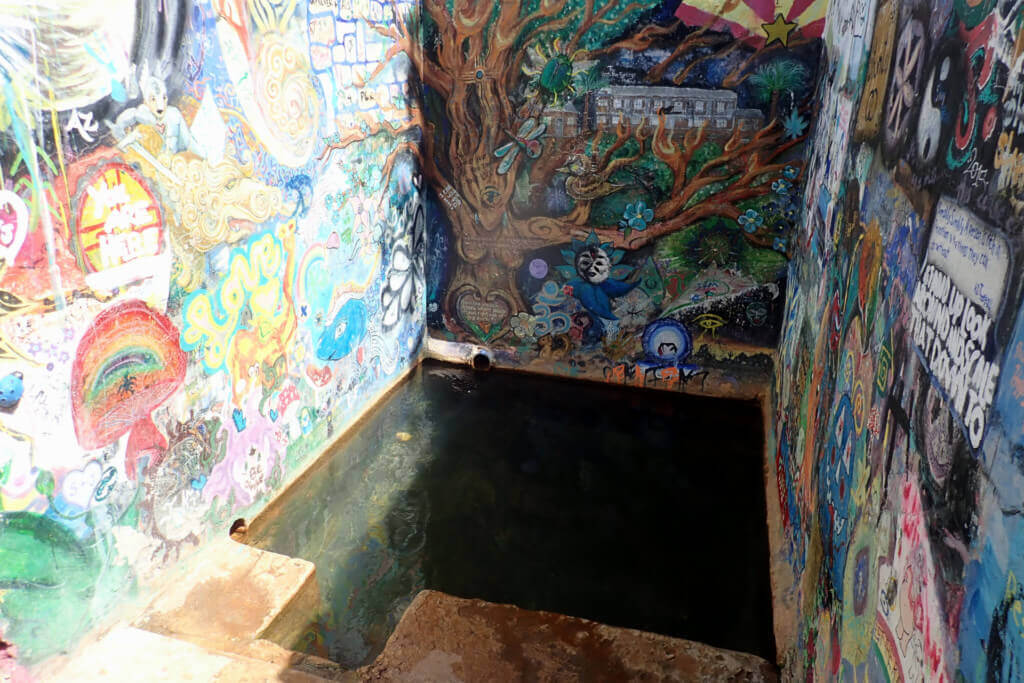 One pool the size of a four person.

It was just deep enough for me to sit in. 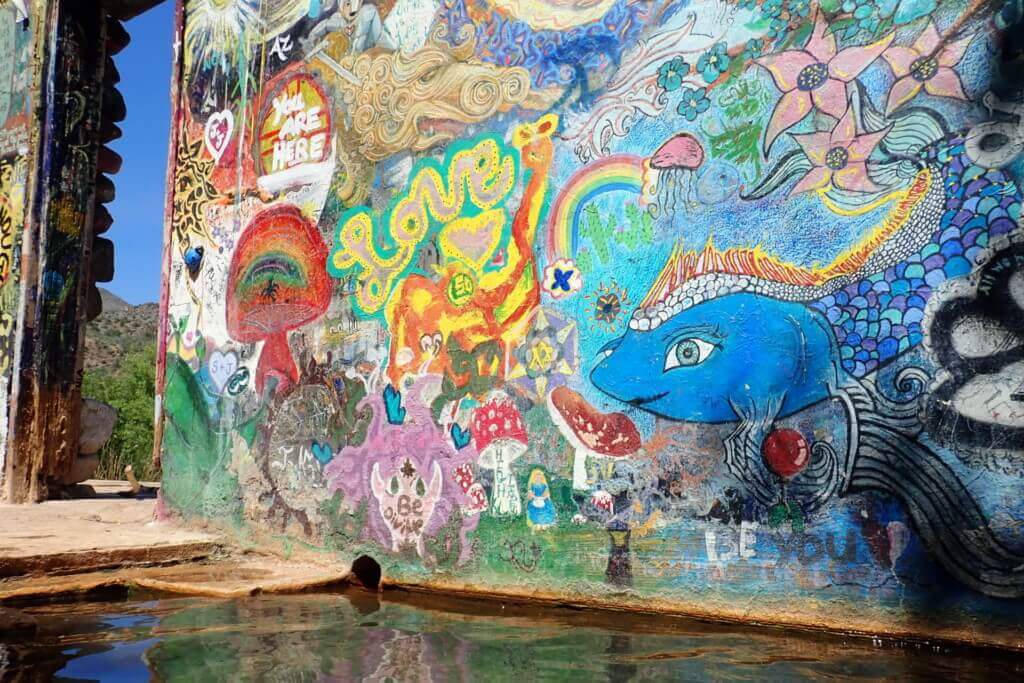 The apparent rule is clothing optional.

It is a paradise for nudists today, as it once was. 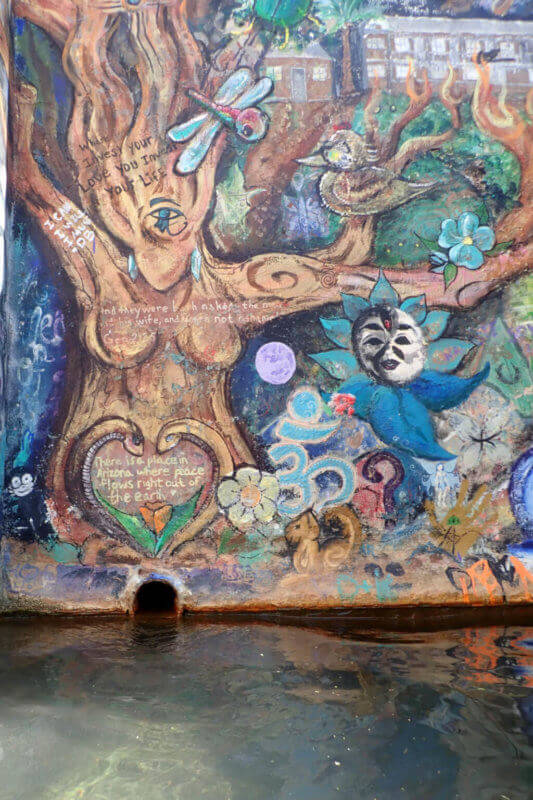 From the water outlet located in the crotch of the graffiti that resembled a tree or a woman's body, mineral water was being provided with bubbles of carbonic acid.

The water emitted a metallic smell, and the water temp was 104 degrees F. 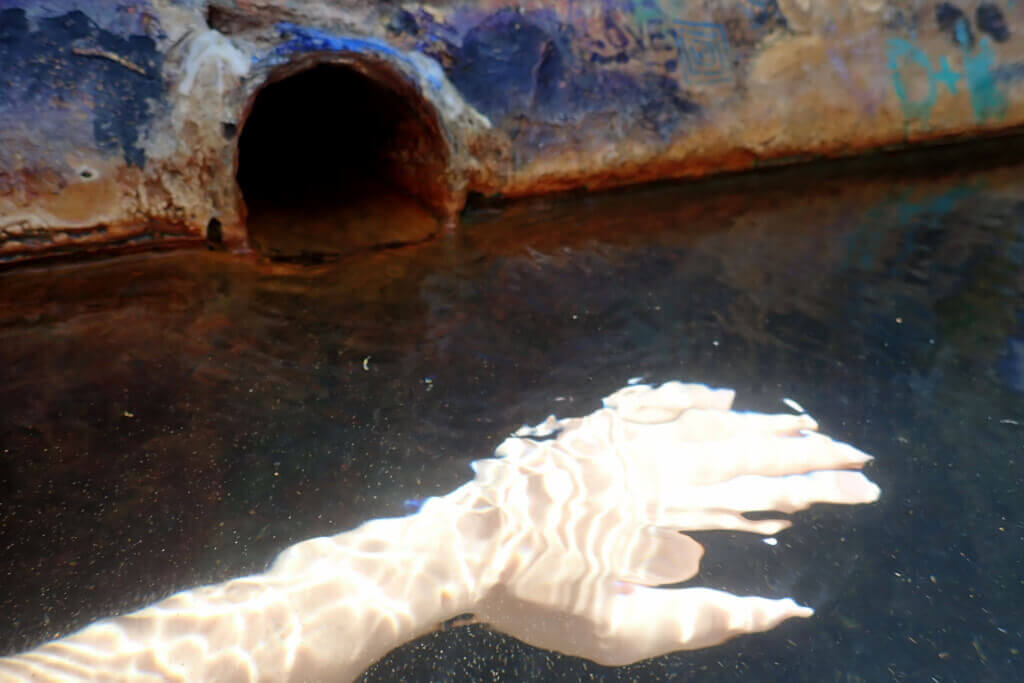 The walls of the bathhouse were from the days of the hot spring hotel, but the ceiling had been lost.

During the day, there was nothing to block the direct sunlight, so it would be more comfortable to visit  in the morning and evening. 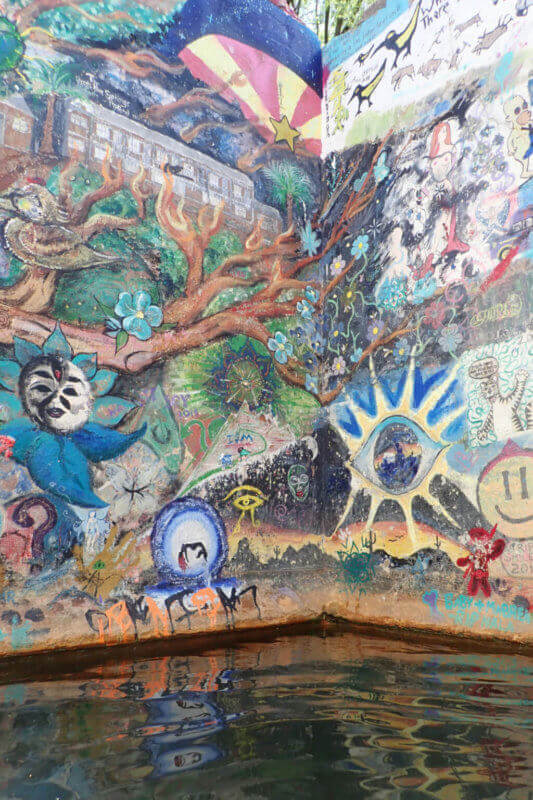 The drains were located on the surface of the water as well as on the bottom of the pool, which was sealed with a bowling pin.

This structure made it possible to drain the water and clean it, thus keeping the inside of the pool clean. 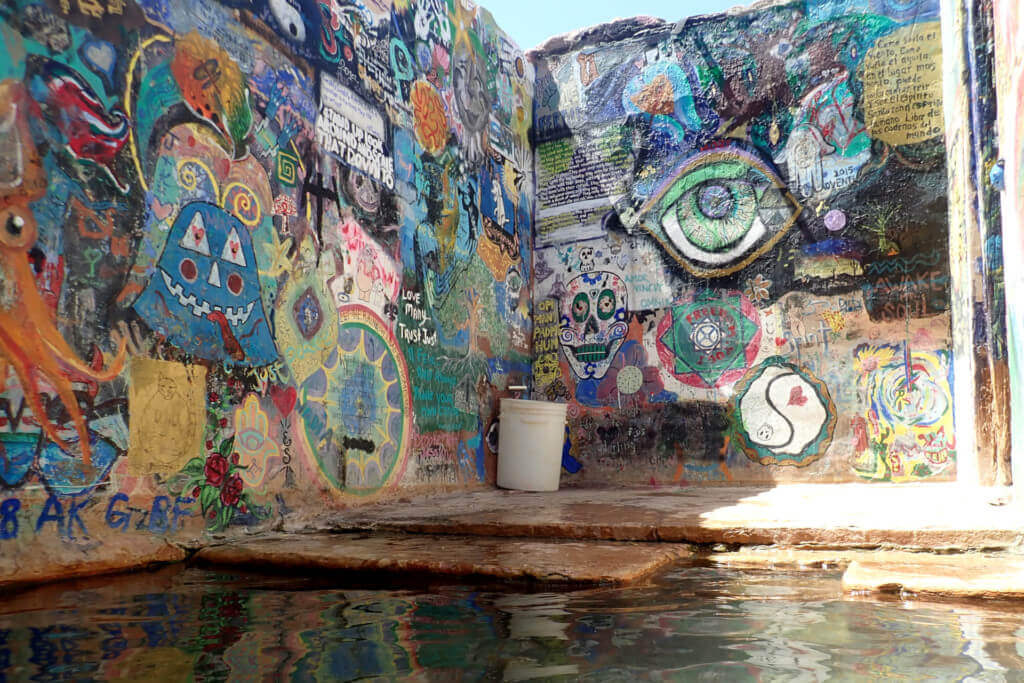 The first time, I lost my car due to lack of preparation and was disappointed for a long time; but on the second attempt, I finally sorted out my feelings and arrived at the colorful paradise.

The excitement I felt at that moment was beyond words. 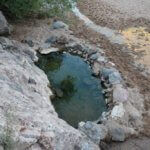 This was my first experience with such a crazy hot spring. I followed animal feces dotting the bed of a dry river and found watering holes for mustangs. The undeveloped hot spring was full of instructions. 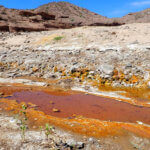 The road to the hottest hot springs in Arizona was completely destroyed by flash floods. At the end of the arduous journey, hot water as hot as 180 degrees F awaited me. 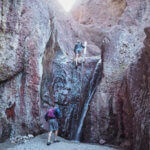 The area around the Hoover Dam is blessed with a number of hot springs. Take a look at the natural corridor where boiling water gushes out from everywhere.

Near I-10, in the desert between Tucson, Arizona, and El Paso, Texas. Geothermal water was springing up at a campground where ATV enthusiasts were gathering.