Every year, the amount of donations by individual in the United States becomes more than a hundred times larger than that of Japan.

One of the reasons is the difference in tax system, but the cultural difference must affect it.

Saratoga, a town in the southern Colorado, near the border to Colorado is famous for its hot springs.

The clean and gender-separated change rooms, shower rooms, and rest rooms are funded by donations.

Looking down from the building, you will see a small pool surrounded by rocks in front of the large pool.

In fact, from the bottom of each pool, hot springs water gushes straight out of the ground.

The large pool is fed by 108 degrees F water with bubbles and sulfur smell.

The small pool is too hot (118 degrees F) to dip in, but the crystal clear water looks simply beautiful.

If you feel the large pool hot, you have a not-so-hot tub fed by 100 degrees F water.

Relatively tepid water is piped from the source, and may be more relaxing.

You have another choice at the riverside.

Capybara
Amazing bubbles!
Good for you.

The discharged water from the pools is mixed with river water here, which is an option to cool down.

Unbelievable you can enjoy the great water without a fee.

A donation is not so special to most people in the United States.

In terms of tax system, there is a ways of thinking that the income tax credits due to donations lead to eventually more active redistribution of income, because people prefer to spend money for intended purposes.

However, the tax system cannot explain why most American people do not hesitate to give money to the homeless.

Christian kind of ideas may be a part of people's life.

Thank you for the great hot springs.

I began to think it natural to donate for the facility; I put in some money in the collection box.

Hobo, a part of the name of this place means a homeless vagrant, especially one who is impoverished.

The term originated in the Western United States during the Great Depression.

Some people may have extended mercy to those who were in distress. 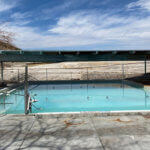 In Yellowstone National Park, it impossible to find a spa facility where uses the mineral water. However, in a nearby town, there is a publicly owned bathhouse at no fee. 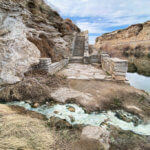 This blog has been introducing the wonders of Thermopolis, Wyoming. Why don't you visit this lesser-known spot of the town?

Many hotels in the United States are under chain managements. Low-end brands are suitable for tourists who do not put much value on the accommodation and service, but want to secure the security. Days Inn is one of such hotel chains, but this is something different. 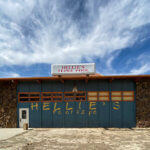 I like to do nothing special all day except soak and lie down. It must be even better if there is a good thermal water. There is a place in Wyoming for such people.