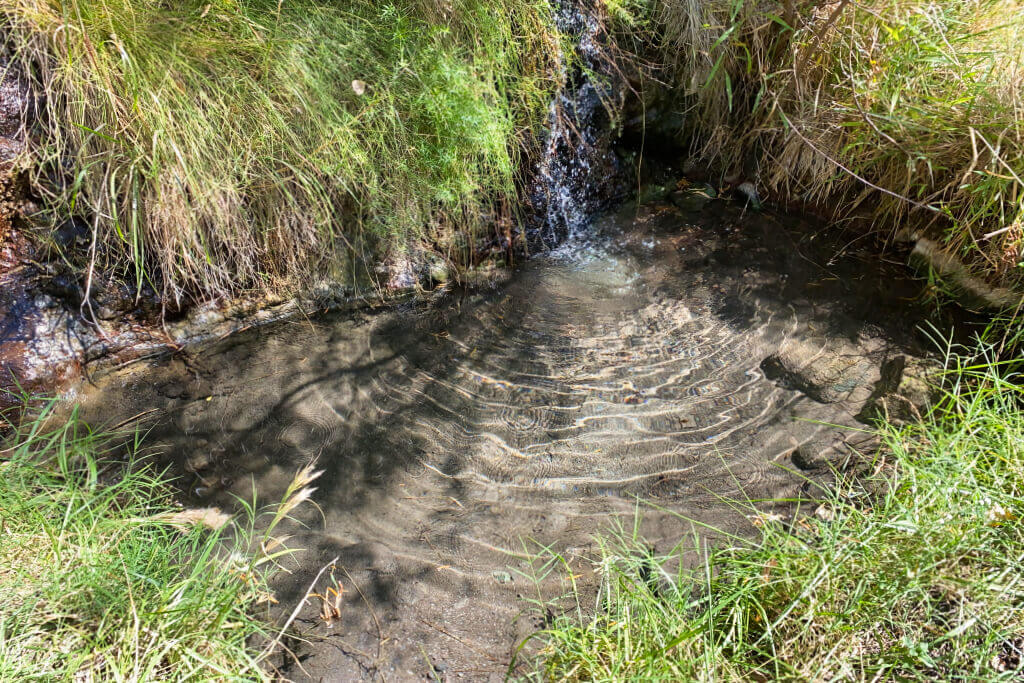 A small, lukewarm puddle of water that barely covers your waist when sitting down.

If being asked if there is any meaning in going to such a hot spring, the answer is "No meaning, but go."

An hour and a half north of Silver City, New Mexico.

My car gradually gained altitude as I drove up and down the winding mountain roads. 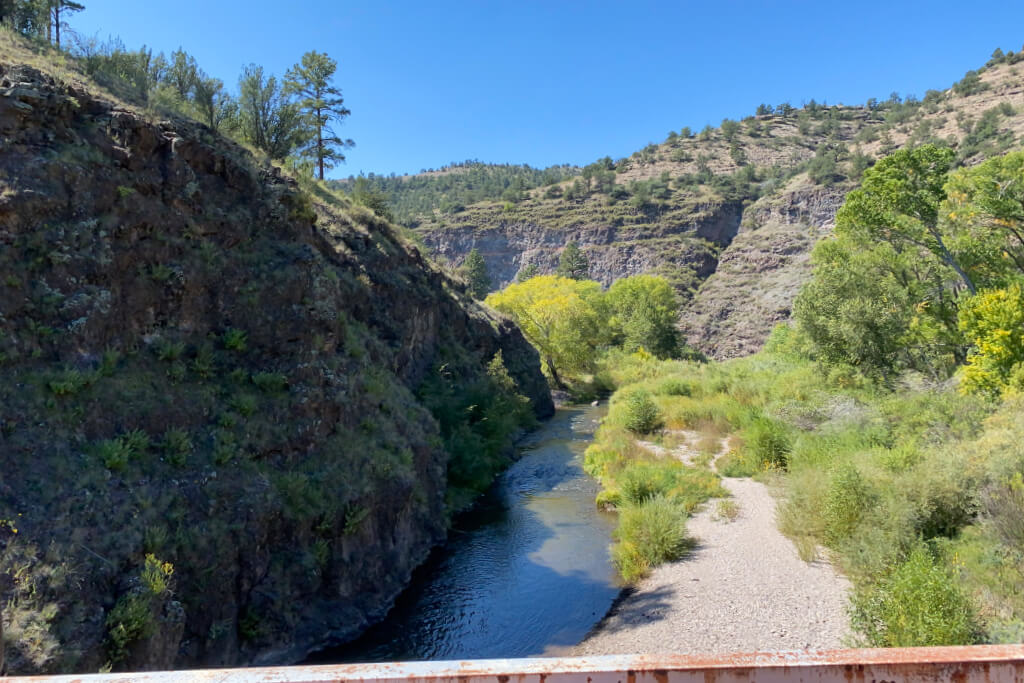 Finally, I lowered the altitude and entered the basin where the Gila River flows.

The area is lined with a few commercial facilities that use hot springs. 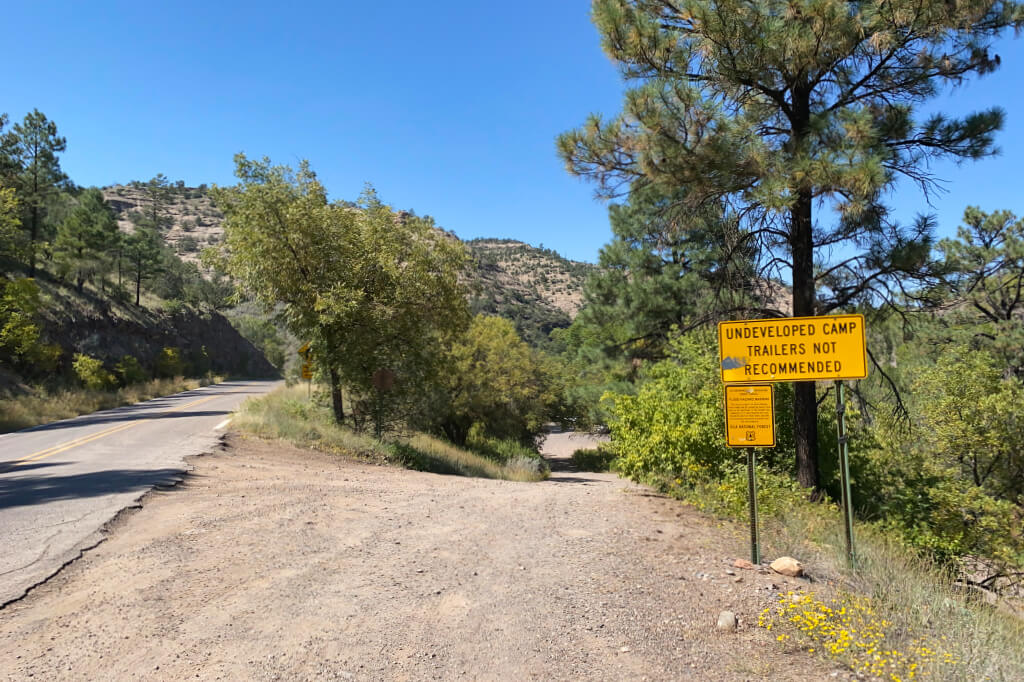 This time I will head to a little-known undeveloped hot spring that requires a hike.

Plan on at least three hours round trip. 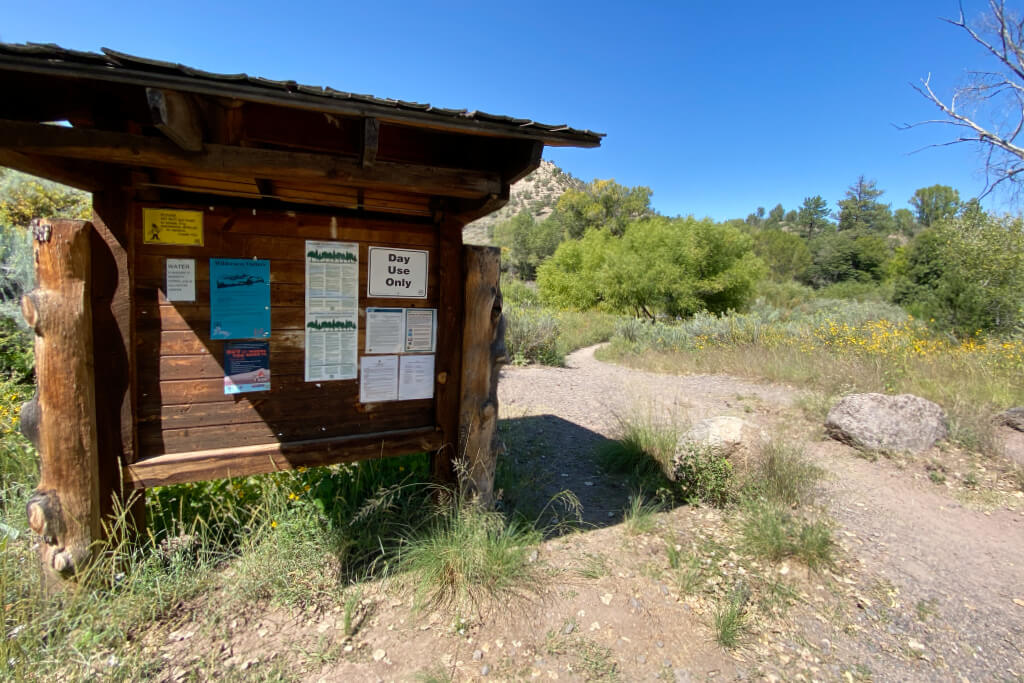 Just before crossing the Gila River on the bridge, turn right toward Grapevine Campground.

This is a complementary campground maintained by Gila National Forest. 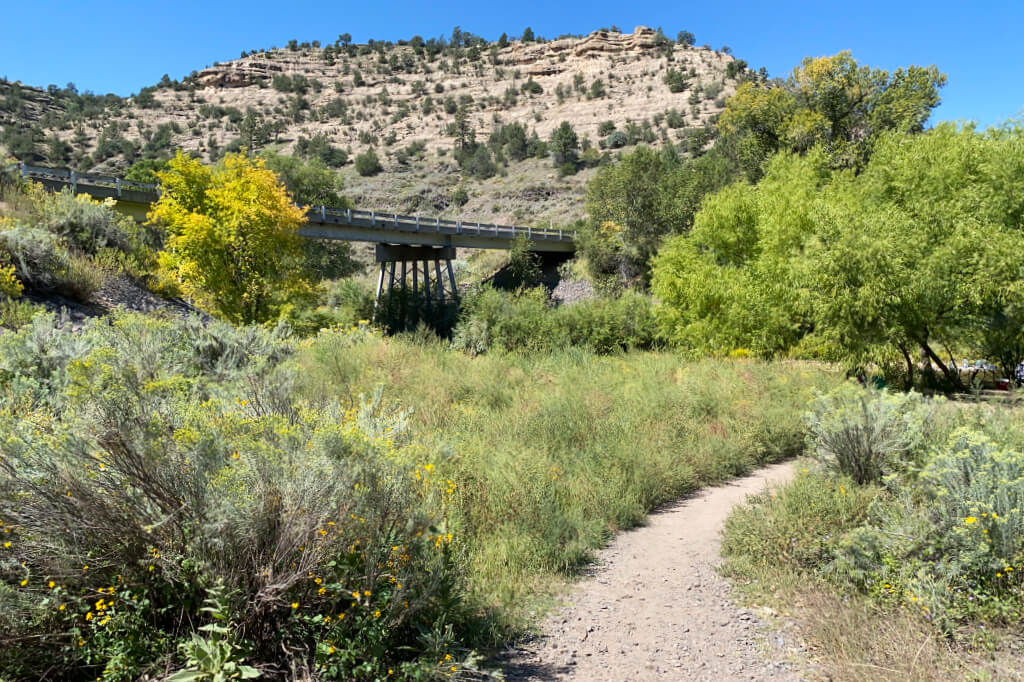 If taking another right at the hairpin turn, you will reach the campground, but if going straight, the trailhead is there.

I got off the car here. 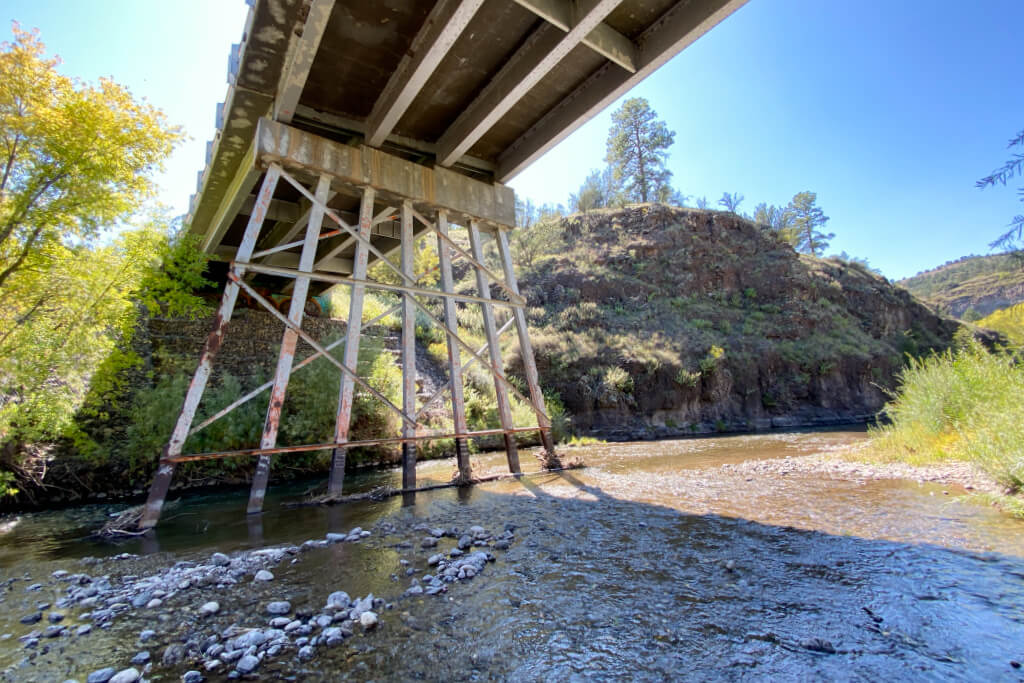 The path suddenly disappeared from where I passed under the bridge.

After this, I had to walk across the river a total of nine times until I reached the destination. 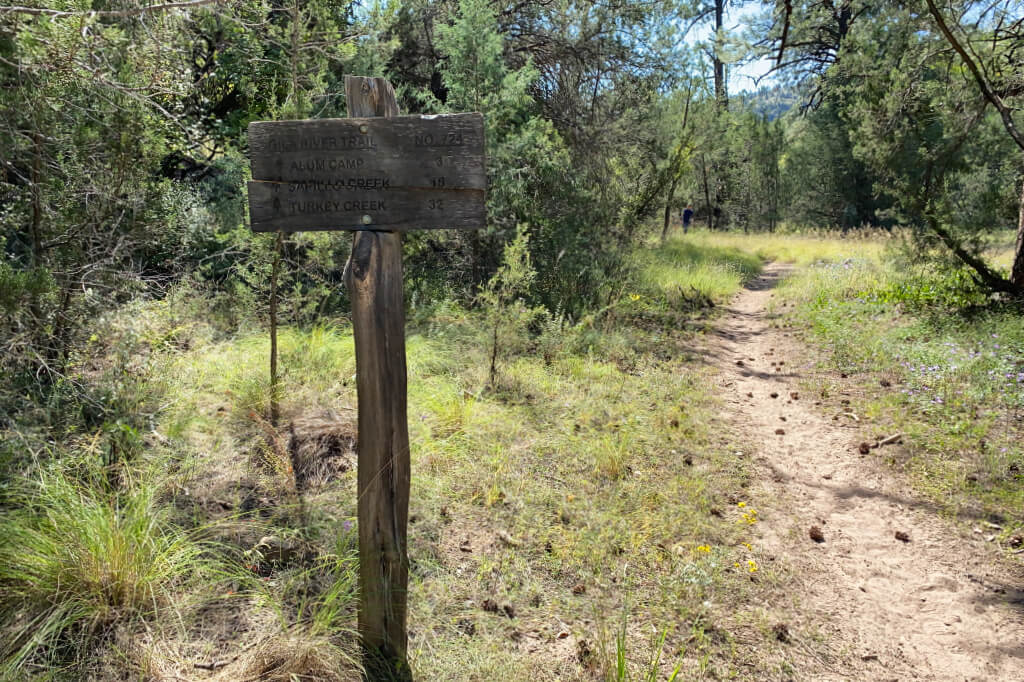 It is a relatively easy trail, only about 4 miles round trip, but it took time to cross the river. 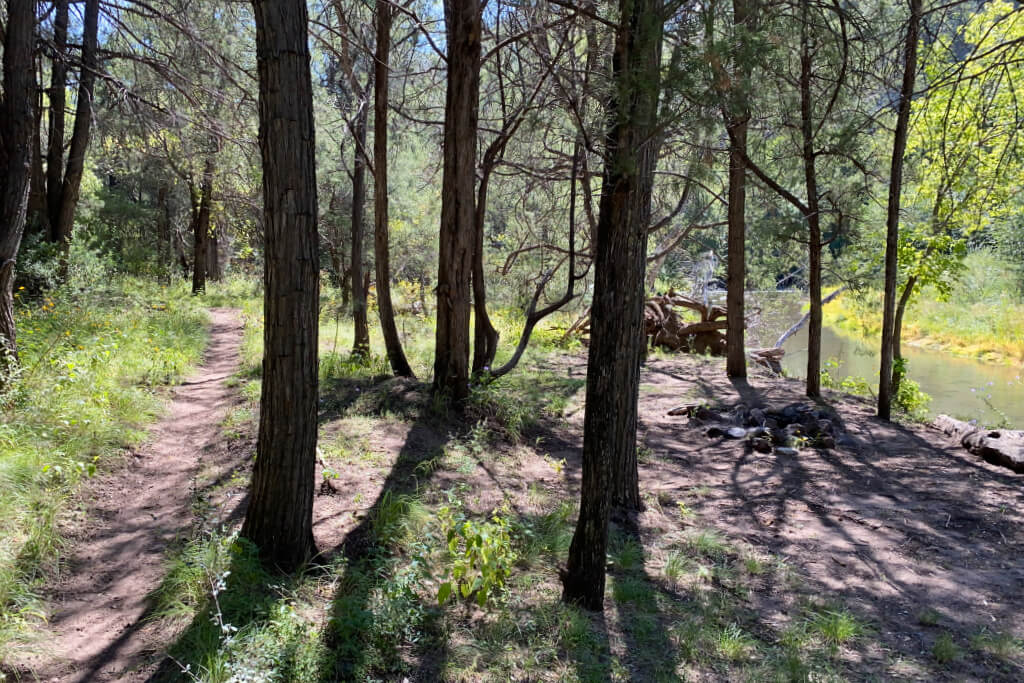 Bringing your own water shoes would be a good idea. 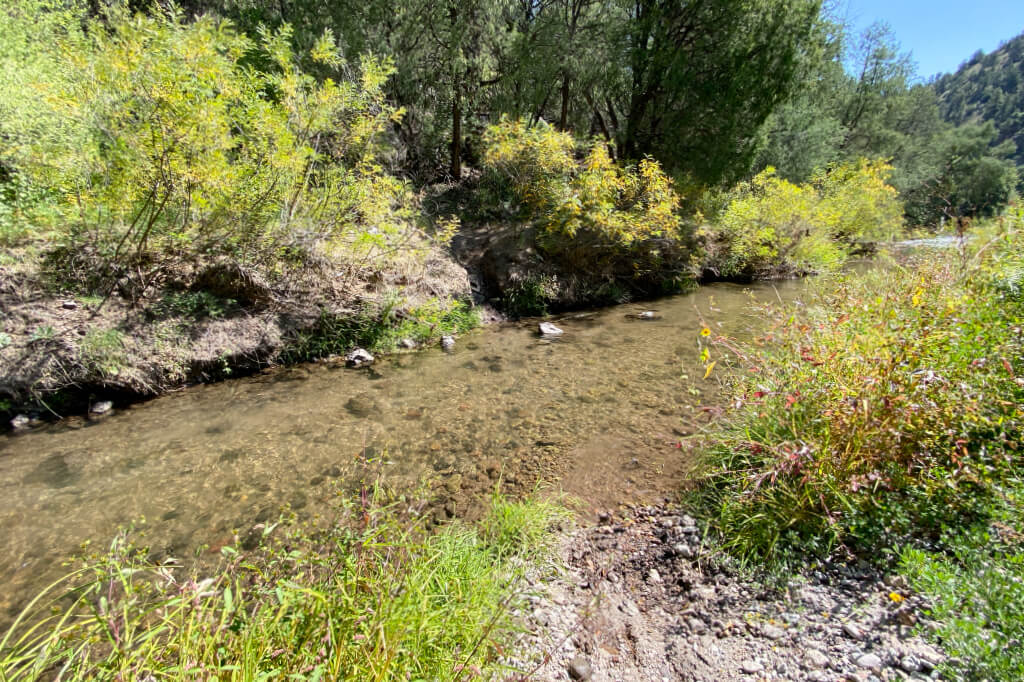 After a while it was easy to lose sight of the path. 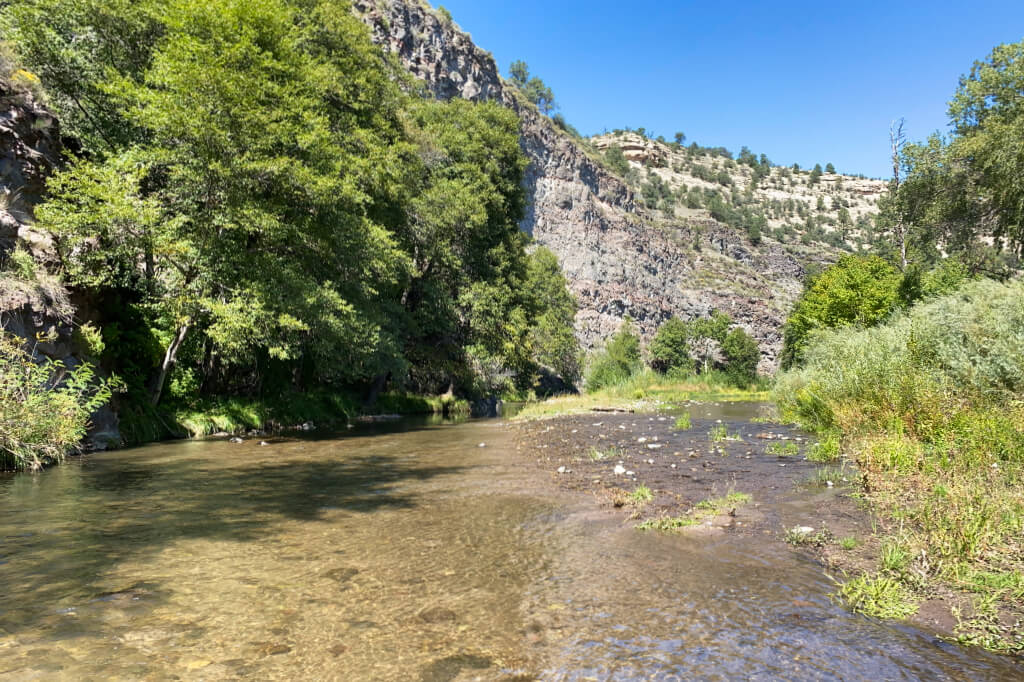 The Gila River was deeper than expected in some places, so be careful of the water level. 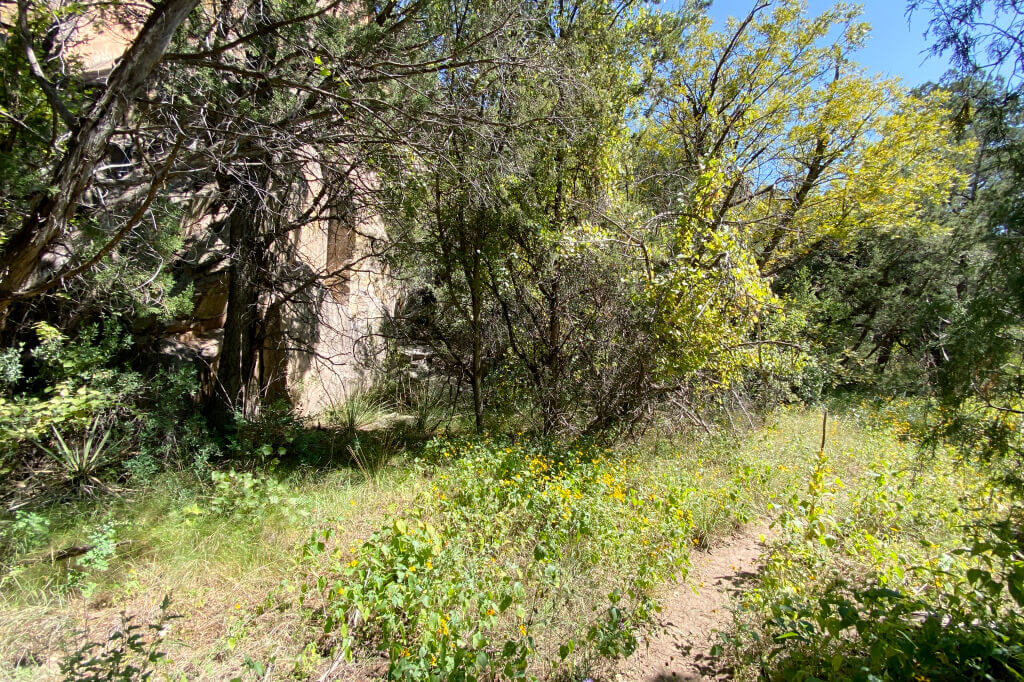 This was actually my second attempt; the first time I couldn't find the hot spring.

The key is to turn left here and enter the former river bed. 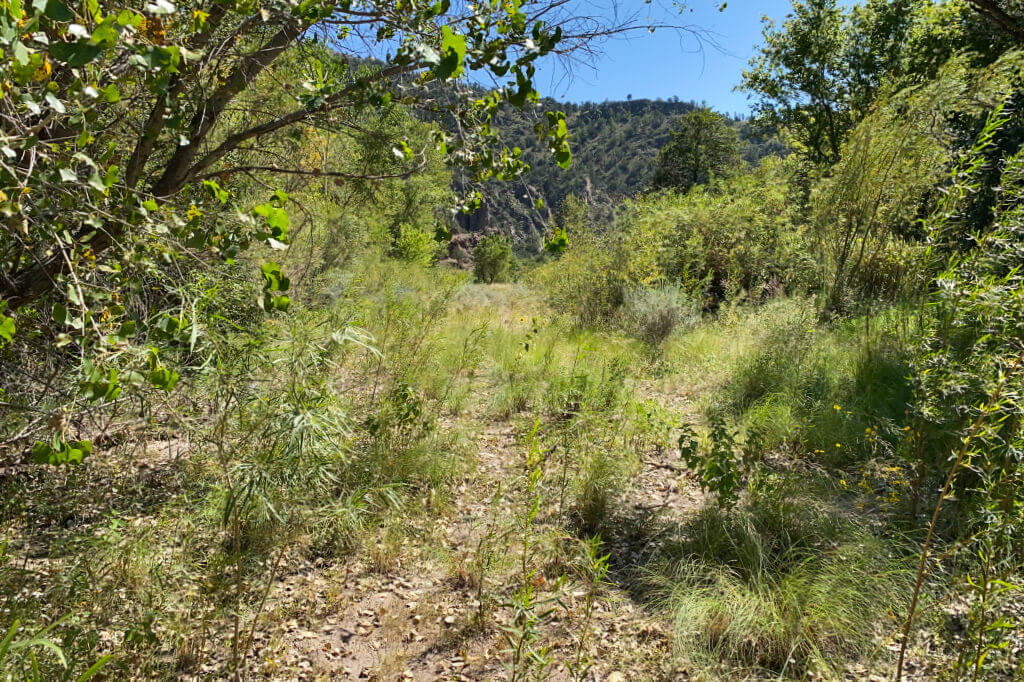 If you just follow the trail, you will pass by and get further and further away.

As long as you follow the former river bed in parallel to the river, it is not so difficult to find the hot springs. 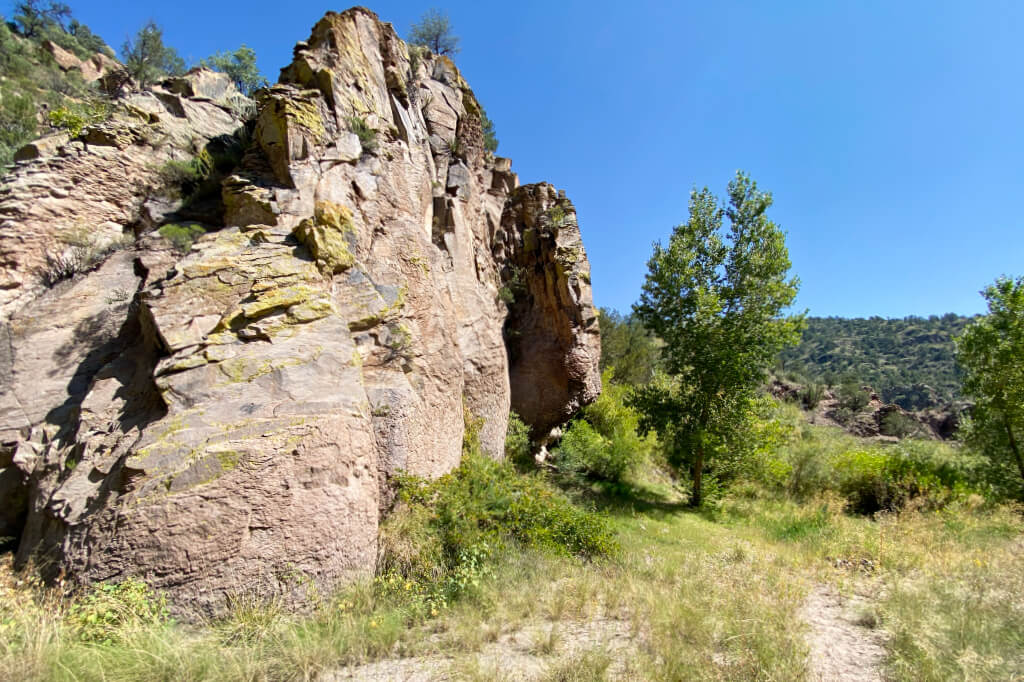 The landmark is this distinctive cliff.

At the end of the path, there were two small puddles of water. 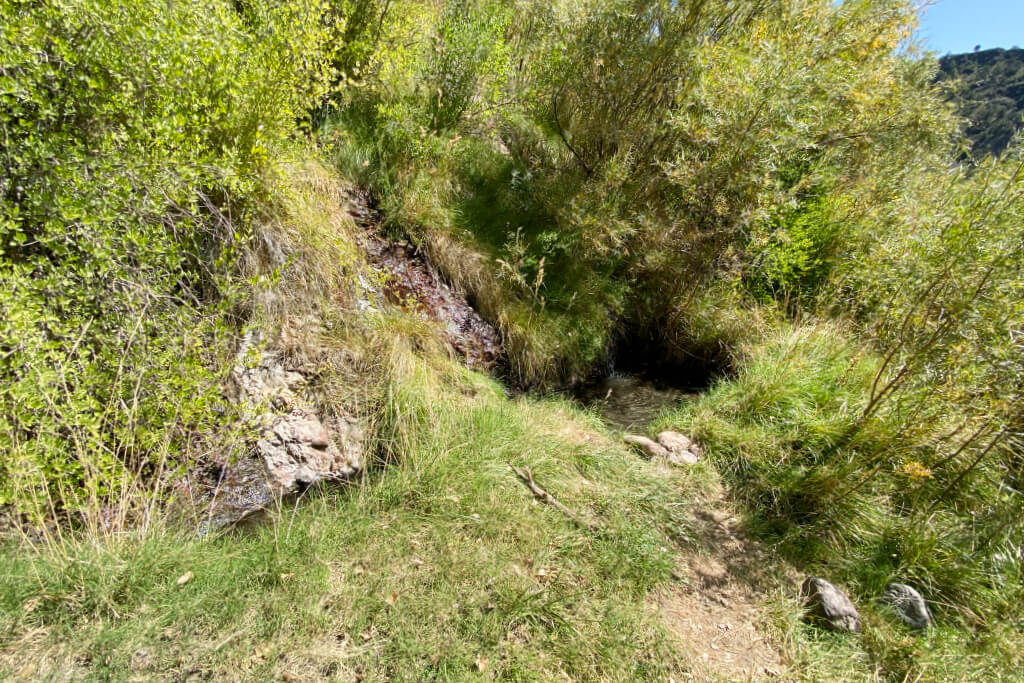 Just a Puddle of Water

Congratulations, this is the destination. 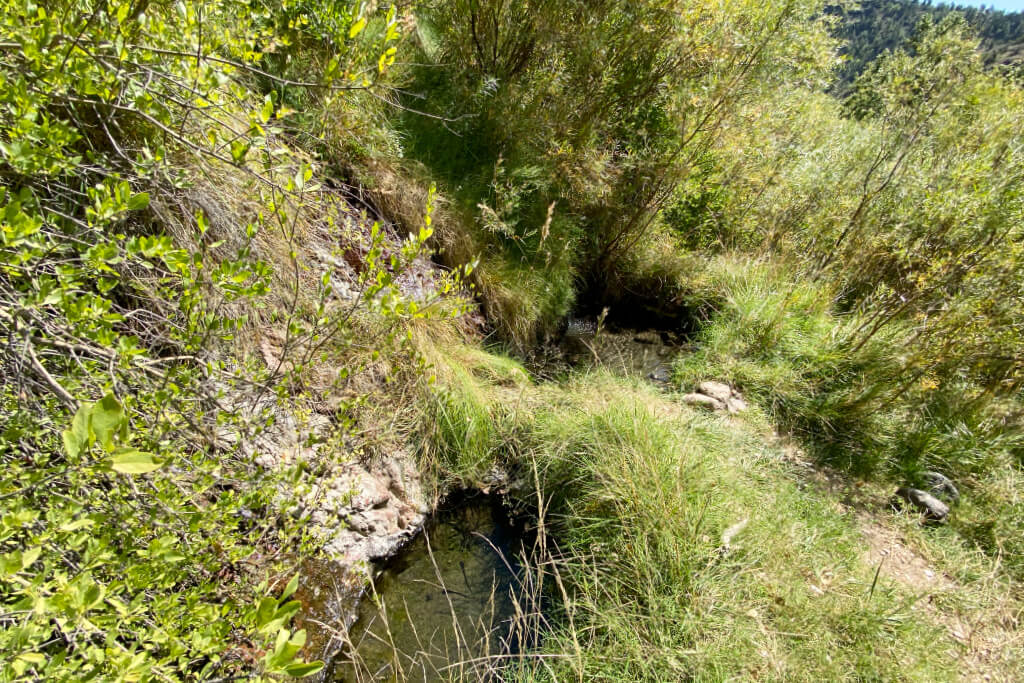 The pond in the foreground was too small to soak; but fresh mineral water was seeping from the rocks. 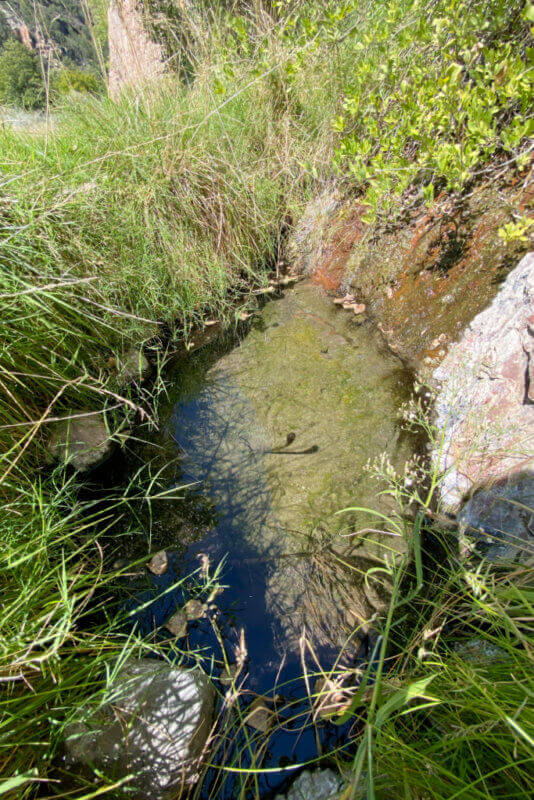 The pond at the back was fed with warm water from two separate sources, from the rock on the left and from the small waterfall on the right. 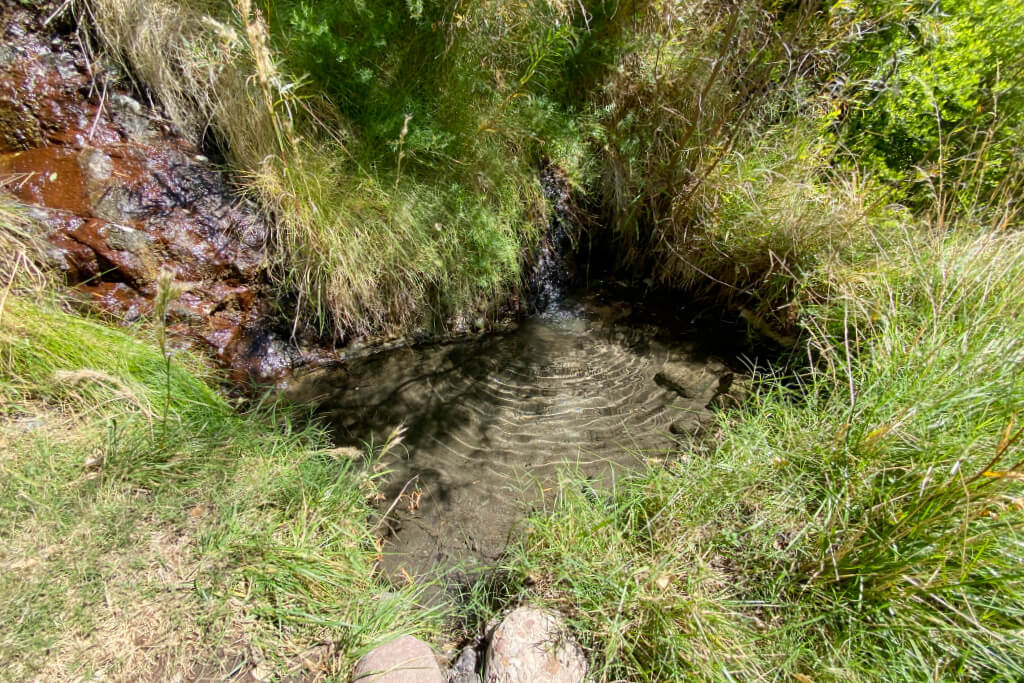 The water temp was 104 degrees F, which was one of the lowest temperatures among the surrounding undeveloped ones. 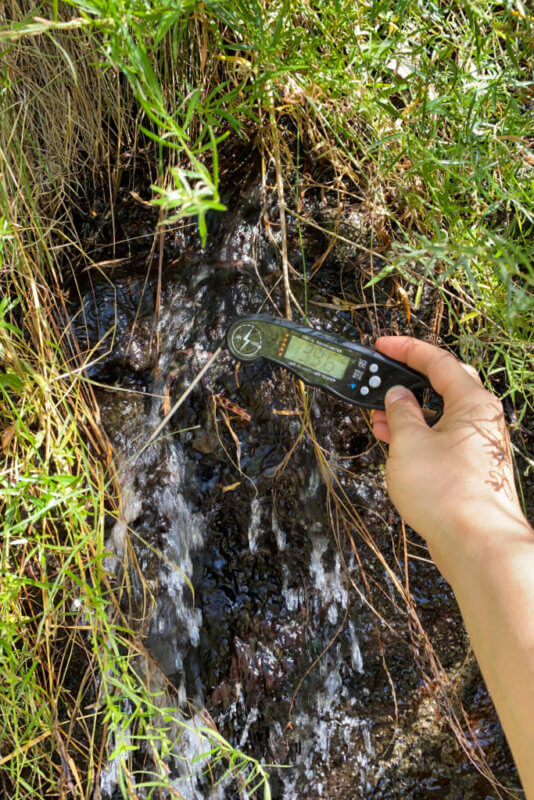 The water was tasteless, odorless, and clear, but there was a layer of mud at the bottom, so the soaking experience was not so comfortable. 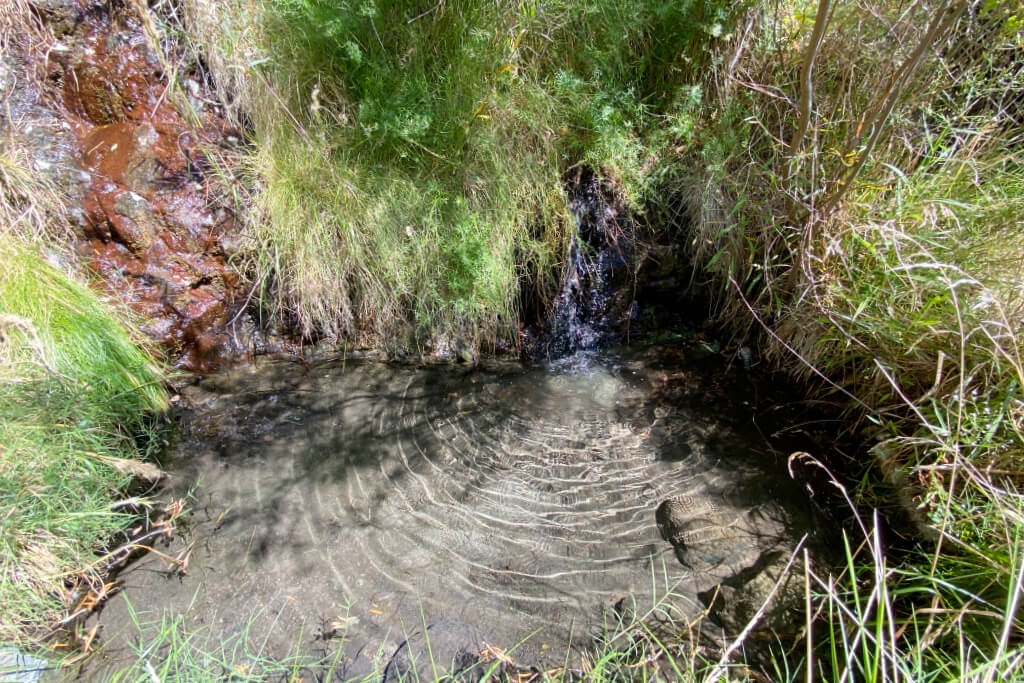 That is why I would not recommend this to others, but personally, I was filled with a sense of accomplishment.

Alpaca
You look happy.
I am. 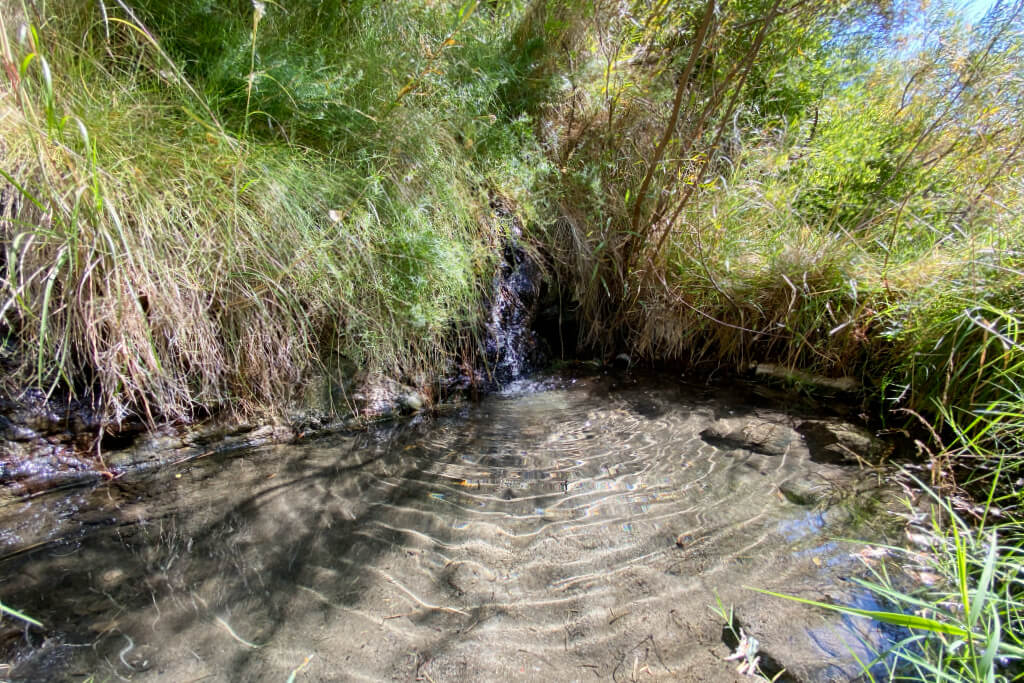